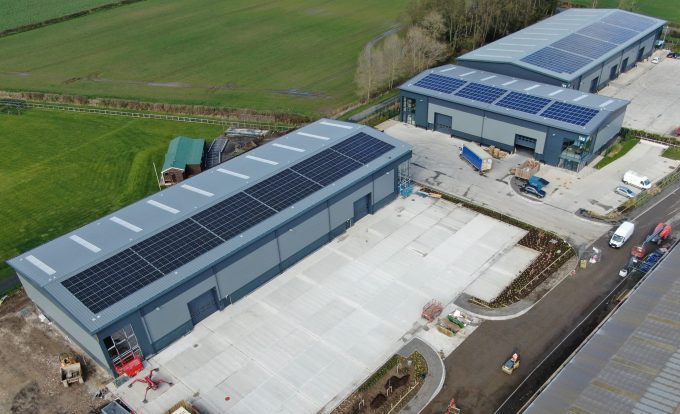 At the IMHX logistics solutions exhibition in Birmingham today, the UK Warehousing Association (UKWA) will distribute a report into the potential for solar energy generation within the sector and contains conclusions that are both hugely positive and equally depressing.

On the plus side, there is a mind-boggling 18.5m acres of warehouse roofs across the country that could have solar panels installed upon them. To put that in terms of everyone’s favourite equivalency – that’s 10,511,363 and a half football pitches of ready-to-use space to generate solar energy, and the report’s authors, specialist consultancy Delta Energy & Environment (Delta-EE), estimate that fully utilised it would generate up to 13.8 trillion watt hours.

Even if only one-third was utilised, it would double the entire country’s current solar energy generation and be enough to fulfill the UK’s 2030 renewable energy target.

The depressing bit, for reasons so wearily familiar, is that  warehouse owners can’t do any of this because permission to supply the national grid remains, utterly perversely, in the hands of the UK’s privatised power companies – those same firms that are gouging UK households for every pound they can screw out of them.

“UKWA draws attention to the extortionate and highly ineffective monopolist gatekeepers that are preventing businesses investing in energy generation and connecting to the energy grid: the District Network Operators (DNOs), controlling who can get access to the electricity grid, when and at what cost.”

One simple policy change – handing DNO control to state regulator Ofgem – would tick so many boxes it’s almost ludicrous. And be a vote-winner: the massive increase in renewable energy production would hit decarbonisation aims (in fact, it would sail past them) and smash domestic dependence on fossil fuels; it should lead to lower electricity prices for households and businesses – and what a potential boon for the logistics industry. It would create jobs.

And it would cost comparatively little.

Currently, new solar plants are being installed on farmland, which is great if your idea of efficiency is: months of planning permission to take land used for growing food; digging miles of ditches to bury cables and connect them to the grid; and building acres of steel frames for mounting solar panels.

Or, they could be installed on existing infrastructure, in an existing industrial zone, such as a warehouse roof, for a fraction of the cost and time and, plugged into that facility’s electric connection, bring an almost instant return on investment that is far cheaper than the current model.

Or, as UKWA CEO Clare Bottle puts it: “Warehouse owners across the country are struggling to pay for gas-powered electricity from the grid, when they could be generating all the power they need and more from the roof of their buildings. Out of sight, easy to maintain and affordable, the case for solar should be obvious and yet we are being held back by poor market practice and failures of regulation.

“We need a fundamental rethink of the way in which DNOs hold power over access to the grid, how they get renewable schemes connected to the grid and the prices they charge.”