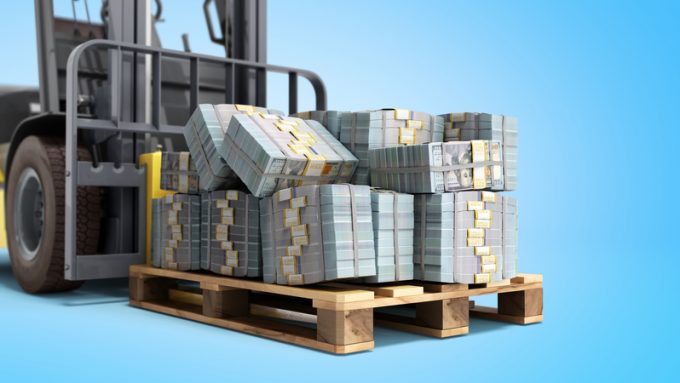 Pallet users should pay a tax, according to one senior freight forwarder.

In a wide-ranging speech at the Logistics CIO Europe conference in Amsterdam this morning, Steve Walker, head of consultancy SWG and founder of SBS Worldwide, bought out by DSV in 2013, urged the industry to consider a charitable tax.

“I’d like to talk a little bit about carbon footprints, and the negative publicity we get for creating, supposedly, 3% of the world’s pollution by transport. Yet we never seem to fight back with any major initiatives – certainly not on a collective basis.

“We should say we will no longer move pallets by ocean for free; we will implement a pallet levy of $5 per pallet come 2021. If all containers had 20 pallets, the pallet levy would yield $1.8m per large vessel.

“Consider if you multiply that for the number of vessels arriving every week in Europe, will the customers want to pay it? No, but maybe the public will buy into it, and governments will give companies tax offsets.

“We can undertake, as an industry, to contribute the majority of fees to marine charities to clean up the oceans, of which we, the human race, have made such a mess.”

While pallets are generally considered re-usable and recyclable, he said, “let’s be honest – it’s not recycled as you and I would expect. They don’t have a very long shelf life, they slowly downgrade until they become something like wooden pellets for burning”.

He added: “And there is a further consideration: wooden pallets should not have their own carbon footprint due to their weight.”

The combined carbon impact of pallets on the emissions of a UCLV is illustrated in the diagram below. 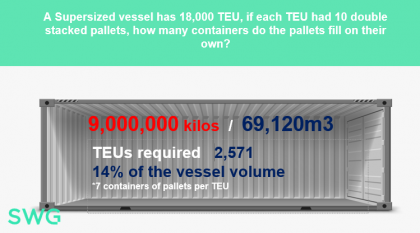 Mr Walker also urged the industry to come up with a better solution, which could be expedited by the proposed tax. He said he had given a talk to young freight forwarders in the UK who, he said, were “incredulous that four-way pallets had been around for 80 years and we hadn’t had the ability to think of a more modern way of moving goods in and out of containers.

“When I first started in freight forwarding, vessels used to come into the port of London and the hatches would go back. The cargo would be removed from the hold and there were minimal supporting packaging materials.

“The whole point of containers is to move freight. So I suggest we need to evaluate that one small thin column on a bill of lading, that has stayed the same for my near-50 year career, where it states packaging.”

Mr Walker added that the industry should have a positive message about emissions: “When we are only delivering what the world has ordered in a take, make, consume and dispose society”.

And Maersk chief executive Soren Skou means that literally, as well as figuratively. In an ...

A commitment to fly wild animals back to their natural habitat free of charge is ...

Smart Freight Centre, a partner of The Loadstar, has published a simple, clear blog on ...

Air cargo is moving towards carbon-neutral flying – slowly but surely

The cargo industry is moving slowly but surely toward carbon-neutral operations. Jochen Thewes, CEO of DB ...

Shippers and forwarders have been urged to invest in sustainable aviation fuel (SAF) via a ...