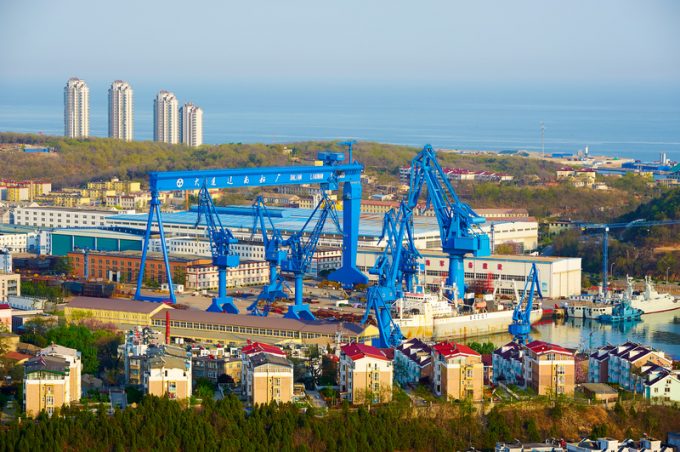 OOCL says it will be able to run a standalone Asia-North Europe loop following the delivery of five 23,000 teu newbuilds in 2023.

“Based on the group’s evaluation on price, technical terms and delivery schedule, the Nantong and Dalian offers were the best among bidders,” said OOIL.

There would likely have been no shortage of bidders, given that the containership orderbook-to-fleet ratio is at its lowest since the 1980s.

However, the South Korean yards and others would have been stretched to compete with the subsidised China state-owned yards and the flexible financing programmes provided by domestic banks.

OOIL said it envisaged bank financing to be arranged “for about 60% of the contract price of each vessel”, with the balance “funded from internal resources”.

The company explained: “These five new buildings are part of our ongoing programme to introduce large, modern, and fuel-efficient vessels to further strengthen our fleet competitiveness, as well as fleet rebalancing, by increasing the proportion of the ships we own in the core fleet, while a number of vessels leased under long-term charters will be returned to the owners.”

The carrier currently owns six 21,000 teu ULCVs deployed on the Asia-North Europe route, which was the “first step” in expansion plans postponed by the “terrible market conditions of 2016”, and which subsequently resulted in a $6.3bn deal for Cosco to acquire OOIL in 2017.

It said the announcement of the mega-ship order was the “long-awaited second step” of the strategic plan.

“We will have the potential to independently form a complete loop in the Asia-Europe trade, where we intend to deploy them in order to strengthen OOCL’s overall competitive position in the market and improve services to customers.

“Balancing this expansion, over the next five years we plan to return or dispose of 13 vessels from our fleet, a total of around 76,000 teu.”

Currently, OOCL partners with parent Cosco, CMA CGM and Evergreen in the Ocean Alliance, which was extended last year to run until 2027.

However, the Cosco group could be keeping its longer-term options open in the case of a further reshuffling of alliance membership, should there be another liner bankruptcy.

“We are pleased to say that the latest engine technology and other state-of-the-art equipment will be used to achieve greater operational efficiency and reduce carbon emission,” said the carrier.

There was however no mention of the newbuild ships having scrubbers installed.

The cost advantages of the exhaust gas cleaning systems have become much less attractive, given the spread between compliant low-sulphur fuel and heavy fuel oil, used by scrubber-fitted ships, has fallen to $80 per ton, from the approximate $250 difference when the IMO regulations came into force on 1 January.