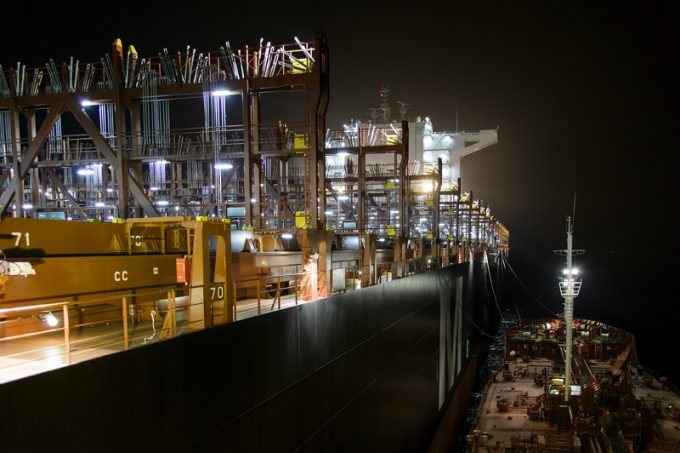 Today’s price for low-sulphur fuel oil (LSFO) at Rotterdam is just under $500 per ton, which is up 25% since the beginning of the year and some 60% higher than in November.

And carriers are busy resetting their fuel increase recovery mechanisms, effective today or from 1 April, to reflect the higher bunker costs.

Moreover, the spread between the IFO 380 heavy fuel oil (HFO), consumed by ships equipped with scrubber technology, and LSFO has widened from around $50 in November to over $100 per ton.

Before the massive spike in freight rates in the second half of last year, the slump in oil prices was the main driver for the better-than-expected carrier financials – Maersk’s liner fuel bill for last year, for example, fell 18% to $3.8bn, for an average rate of $323 per ton.

However, on the other side of the ledger, container spot rates between Asia and the US west coast are some 250% higher than a year ago, and a phenomenal four times higher from Asia to North Europe.

And the signs are that the unrelenting bullish short-term market will heavily influence annual contract rates, thus guaranteeing that carriers will still enjoy unprecedented profitability this year, despite higher fuel costs.

But, in addition to the increased price of bunkers, carriers face a number of other cost pressures this year, including sky-rocketing charter rates for their ships, increased feeder prices and hikes in haulage and terminal costs.

Charter rates have surged to 13-year highs, with carriers having to pay two or three times more for the same ship than a year ago, and they are obliged to commit to fix vessels for two, three or more years at inflated rates, versus the flexible periods of three to six months previously.

Of the top five carriers, MSC is the most exposed to the charter market, with 73% of its 584 vessels leased, compared with 45% for Maersk and 40% by Hapag-Lloyd. This may explain MSC’s recent aggressive sorties into the sale & purchase market where it has snapped up more than 30 second-hand vessels since August in a bid to insulate itself from the rampant charter market rate inflation.

Feeder operators that generally charter their tonnage on flexible periods with owners are also under the cosh and at the top of the list of service providers asking for substantial rate hikes from their deepsea carrier customers.

“They [carriers] can no longer fob us off with excuses that their freight rates might fall back, as we are seeing and hearing daily about their very strong results and vastly improved outlook,” a feeder contact told The Loadstar.

And not far behind the feeder operators seeking rate increases are hauliers and terminal operators that saw their businesses hit by the volume troughs and peaks of 2020.

Meanwhile, a quick straw poll by The Loadstar today found that shippers were ‘unsympathetic’ towards the increased costs being incurred by carriers, particularly their fuel increase mechanism roll-outs.

“I think they are really taking the biscuit now, demanding higher BAFs when our 40ft rates are now five times higher than we were paying a year ago,” complained one UK forwarder.