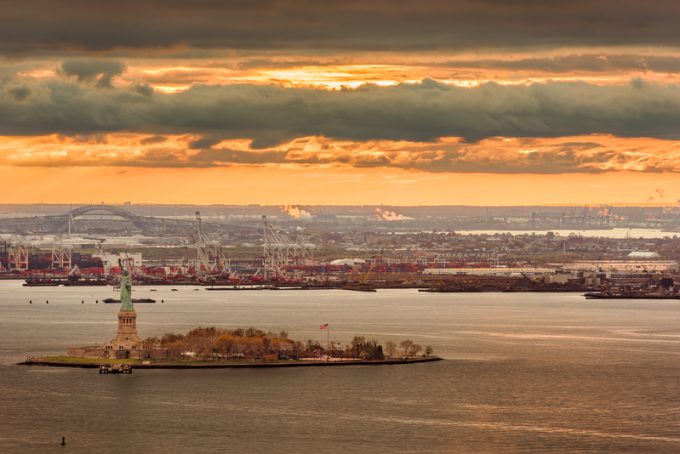 Having already outstripped Long Beach as a bigger US import container hub, the port of New York & New Jersey is close to usurping Los Angeles at the top of the rankings.

The reason is the accelerating coastal shift of imports from west to east.

Indeed, NY&NJ’s ascendancy in the port rankings is even more impressive compared with pre-pandemic levels – volumes increased 43%, compared with December 2019.

Last month, there were, on average, nearly 100 vessels waiting to berth at the Los Angeles and Long Beach terminals, laden with an estimated 500,000 teu of cargo.

Although the average delay is said to be 18 days, some ships have waited more than a month to discharge their containers, throwing the supply chain into disarray and accelerating the coastal shift to the less-congested hubs on the east coast.

Moreover, the routing change by shippers has often brought the benefits of greater predictability and expediency to inland destinations, along with reductions in line haul costs from using the all-water east coast services.

Another factor influencing the thinking of shippers is the looming labour contract negotiations with the International Longshore and Warehouse Union (ILWU), which have a history of going to the wire. The current contract with the dockworkers expires in July, with the ILWU angrily rejecting a request from the Pacific Maritime Association (PMA) employers to delay negotiations until next year.

PMA president and CEO James McKenna warned there was “already a perception among the trade community that negotiations are likely to result in some kind of disruption”.

Notwithstanding the growth in imports at US east and Gulf coast ports, Blue Alpha Capital reports flat overall growth at the top 10 largest ports in the US, with December throughput edging up just 1.2% on the same month of 2020, to 2,030,011 teu, with the quarterly number of 6,159,991 teu up 0.7% on the previous year.

In particular, US agriculture exporters have had a continuous struggle to persuade ocean carriers to provide equipment and take their bookings, accusing the lines of refusing to accept bookings in favour of repositioning boxes back to Asia, in order to take advantage of sky-high eastbound rates.

The US Agriculture Transport Coalition lobby group has estimated that almost a quarter of foreign sales could not be completed last year, due to capacity restrictions.

Listen to why trucking – not terminal operations – is the main bottleneck in China as Covid lockdowns bit, from The Loadstar Podcast.