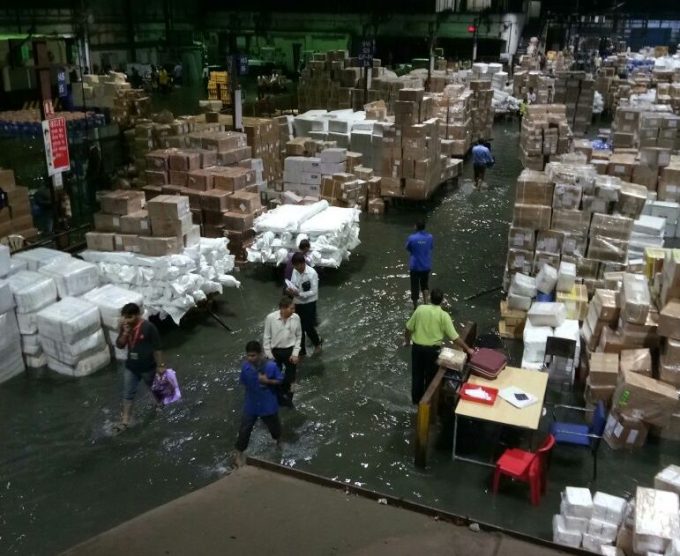 Flood waters in Mumbai are reportedly receding, but delays plague the airport and sea terminals as another global supply chain hub succumbs to incremental weather.

Reporting its heaviest rainfall in more than a decade, India’s second-largest city joins Hong Kong and Houston, both hit by severe storms in the last week.

Despite Mumbai’s floods receding, a combination of heavy rain and the declaration of a public holiday led GAC India to impose a skeleton staff for port and customs operations.

As a result, the company said, there were delays in import and export clearance, further hampered by EDI system servers nationwide going down five days ago. Although the servers were expected to be up and running today, there had been no update as The Loadstar went to press.

Cargo operations around the Port Lighterage area remain suspended and the container terminal at Jawaharlal Nehru Port was affected for more than three hours on Tuesday.

While Mumbai International Airport had reported multiple cancellations and delays, it remains operational but has advised customers to contact their carriers for updates.

Images sent to The Loadstar show facilities at both port and airport in knee-high water. One source said there was no news on when things would return to normal, but expected it to be at least 10-days after the rain stops.

Supply chain operations in South Asia have taken a battering in recent months, and the flooding in India follows several weeks of severe delays and congestion in Bangladesh.

And, as we reported this month, operations in Dhaka are at a standstill following the imposition of new security regulations by the UK and German governments.

This resulted in hundreds of tonnes of air cargo capacity being pulled from the country, leaving forwarders struggling to export their goods. And it seems the situation has not improved, with one forwarder telling The Loadstar the situation is “still screwed up”.

Furthermore, the source could forsee no improvement as more orders are being placed with the country’s manufacturers due to their low prices.

“This will only mean the situation gets worse; the size of the airport cannot be increased and the size of the port prevents more ships being brought in,” said the source.

“The issue with the airport is primarily because of a lack of land, but it is compounded by the levels of bureaucracy in the country – which would make the 20-year wait for [another runway at] Heathrow look short.”