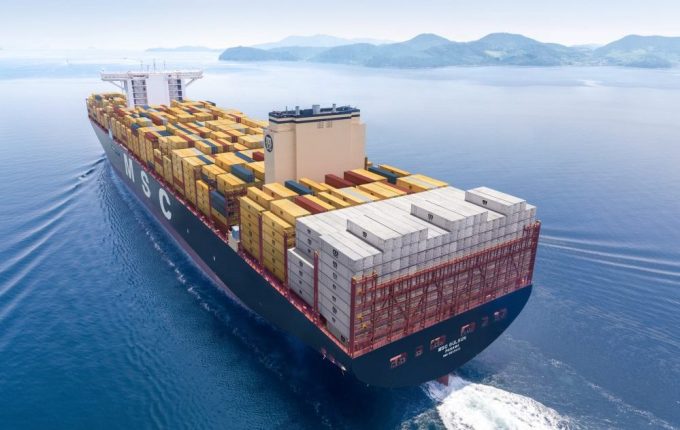 MSC has revised the official capacity of its new ULCV, MSC Gulsun, by an additional 805 teu, to 23,765 teu, making it more than 2,000 teu larger than the biggest ships operated by its competitors.

The Aponte family-owned liner said the new class of vessel had “been designed with a wide range of environmental, efficiency, stability and safety matters in mind”.

The MSC Gulson, it claims, features a “remarkable approach to energy efficiency” via bow design and minimised wind resistance.

Part of a series of eleven vessels, it is one of six being built by Samsung Heavy Industries (SHI) in South Korea, with the other five constructed at compatriot Daewoo Shipbuilding & Marine Engineering, the MSC Gulsun completed its maiden voyage from Asia to North Europe this week.

Although the same length as the 21,413 teu OOCL Hong Kong-series of ULCVs, at 399 metres, the scrubber-fitted MSC Gulson has a beam 2.7 metres wider, at 61.5 metres, enabling an extra row of containers and making 24 rows across the weather deck.

With an optimum load of light medium and heavy boxes, the MSC Gulson would need to be stowed 13 containers high on deck to achieve the 23,765 teu intake, but this is unlikely unless the vessel is topped up with empty containers for repatriation on the backhaul Asia-North Europe service.

Moreover, the extra row across its beam will exceed the outreach capabilities at some ports on its rotation. Indeed, Alphaliner noted that at the MSC Gulson’s first call, at Bremerhaven earlier in the week, the containers to be discharged at the German port were stowed only 23 across, due to the restricted reach of the terminal’s shore cranes.

There are now around 50 ULCVs of 20,000 teu or more operated by ocean carriers, all of which are deployed on Asia-North Europe, with new deliveries expected to double that number by the end of next year. South Korean carrier HMM, which will join THE Alliance next April, has an orderbook of twelve 23,000 teu scrubber-fitted vessels and Taiwanese Evergreen has just disclosed its intention to order up to eleven 23,000 teu newbuilds.

Both carriers have, like MSC, opted for scrubbers to be fitted on the new vessels to enable the continued burning of HFO (heavy fuel oil) after IMO 2020. Depending on the premium payable for low-sulphur compliant fuel after 1 January, it has been calculated that scrubbers could potentially save container lines using the exhaust gas cleaning technology some $2m per Asia-North Europe roundtrip voyage.