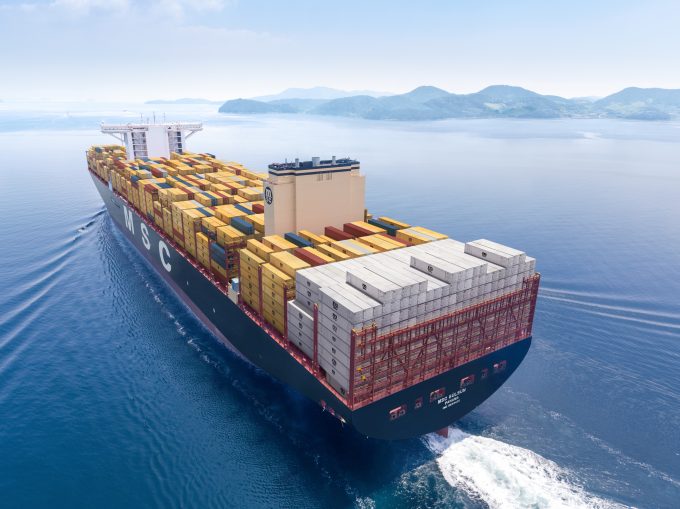 MSC said it has started to bunker some of its vessels calling at Rotterdam with a blend of fuel oil containing biofuels, as it strives to be seen to be reducing its carbon footprint.

The carrier did not specify how many ships are to be involved, or the cost implication.

However, today the Brussels-based NGO Transport & Environment (T&E) claimed MSC was responsible for around 11 million tonnes of CO2 emissions in 2018,

Citing a new study, T&E argued that if shipping were included in the EU’s emissions trading system, MSC would rank as the eighth-biggest emitter in the bloc. The study ranked budget airline Ryanair tenth.

MSC said it had so far trialled a 10% blend of biofuel in its ships, which, according to Bud Darr, executive vice president, maritime policy & government affairs for MSC Group, is expected to result in a reduction in absolute CO2 emissions of between 15-20% for the ships concerned.

“The potential CO2 reduction in the bio component of these fuels could reach 80-90%, which we will monitor and confirm over time,” added Mr Darr.

The carrier said: “Responsibly sourced biofuels could provide an alternative solution for the shipping sector to meet the 2030 IMO level of ambition for CO2 emissions intensity reduction, as well as to make significant progress toward the 2050 levels of ambition.”

Notwithstanding the biofuel trials, MSC said that its other research into the use of alternative fuels formed part of its preparations for the compliance with the IMO’s 0.5% sulphur cap on marine fuel that will come into force on 1 January.

In this respect, compared with its liner rivals, the carrier will have by far the largest number of ships fitted with scrubbers, with around half of its 564-strong fleet equipped with the exhaust gas cleaning technology, enabling them to continue to consume cheaper HFO (heavy fuel oil) next year.

“The great challenge which remains for container shipping this century is how to decarbonise and meet the IMO’s future emissions goals beyond 2030,” said Mr Darr.

He said MSC’s fleet improvement programme had resulted in a 13% reduction between 2015 and 2018, based on its internal energy efficiency operational indicator. Furthermore, MSC claimed its newbuild 23,000 teu MSC Gulsun-class vessels had “the lowest carbon footprint by design” at 7.49 grams of CO2 emissions to move one tonne of cargo per one nautical mile.

It said it was “committed to reducing the environmental footprint of global supply chains”, but that the IMO’s ambitious targets would “not be achievable without some major breakthroughs in fuel and propulsion technologies”.

Last week, CMA CGM said that, in cooperation with the Swedish home furnishings firm Ikea, it had completed a trial shipment of goods between Asia and North Europe on the 16,000 teu CMA CGM Alexander van Humboldt, powered by a heavy fuel oil-equivalent bio-fuel (BFO).

Meanwhile, Maersk has teamed up with industry peers and customers to find a zero-carbon fuel to power its vessels that will be built by 2030. The Danish carrier said that so far, alcohol, biomethane and ammonia had been identified as the best positioned fuels to reach its zero-carbon goal.