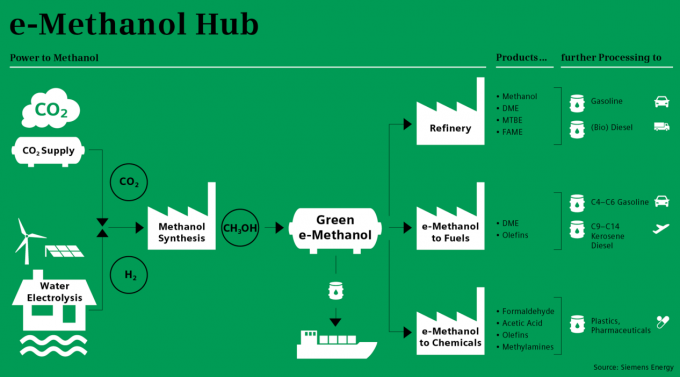 Maersk Line has announced it will order a series of eight green methanol and diesel-powered dual-fuel vessels of 16,000 teu each.

The ships will be built at Korea’s Hyundai Heavy Industries shipyard and will cost $175m each, a combined cost of $2.1bn, including 10-15% in additional capital costs for the dual fuel arrangement.

The ships are part of Maersk’s fleet replacement programme and their size is specifically designed to allow flexibility in their deployment.

Ole Graa Jakobsen, head of fleet technology, said: “We have not decided on the specific deployment yet,”  and referring to competitors that had designed and built larger vessels, he added: “These vessels are not just for the Asia to Europe trade, they can be deployed on other routes, they’re flexible.”

Maersk expects the order for these dual-fuel vessels will stimulate a green methanol fuel market, but  accepts that the ships may use conventional fuels in the early part of their deployment.

“Our intention is to operate the vessels 100% on methanol, but we have the back-up of VLSFO [very-low sulphur fuel oil] if necessary,” explained Mr Jakobsen.

Maersk believes it is not acceptable to say green fuels do not exist.

Berit Hinnemann, head of decarbonisation business development, said each ship would require a supply of 35,000-40,000 tonnes of methanol annually, and some would be bio-methanol, which is produced from biomass and waste products, and has a limited supply.

Being the first to in the uptake of green fuels means higher costs and green fuels do have higher costs, this is a key challenge, but “each partner must share the risk”, said Mr Jakobsen.

However, the Danish company expects the use of methanol and the creation of a market for the fuel will stimulate the production of e-methanol, which has a far more complex production process, through the use of waste carbon, electrolysis of water using excess energy from wind turbine power and capturing greenhouse gases.

Maersk said: “We do not intend to use recycled or fossil CO2 in the production of methanol for our fleet. Our aim is to use biogenic CO2 – or, at a later stage, CO2 from direct air capture – in the methanol for our vessels. This is also the case for our sourcing project for our e-methanol fuelled feeder, for which the biogenic CO2 is based on waste biomass.”

However, Madadh Maclaine, secretary general of the Zero Emissions Ship Technology Association, said: “It is irresponsible to capture carbon and then release it into the atmosphere again.”

Ms Maclaine added: “According to the UNFCC Climate report, ZESTA sees only one option: that we must make ‘drastic, rapid and large-scale reductions in greenhouse gases to limit global warming to 1.5 degrees’ by pursuing the ‘very low emissions scenario’, because we can.

“Any carbon that can be captured from stacks must not be re-released. CO2 captured directly from the air and re-released does not balance out, due to the time the re-emitted CO2 spends in the atmosphere.

“We must be cautious of net-zero accounting systems, as there tend to be holes big enough to sail the world fleet through. I’m afraid that ‘green’ methanol may be leading the fleet on a voyage to nowhere, or worse, to a sea of stranded assets.”

Maersk has said that more than half of its 200 largest customers have set – or are in the process of setting – ambitious zero-carbon targets for their supply chains. And some  have already demonstrated their commitment to more sustainable supply chains.

Michelle Grose, head of logistics and fulfilment at Unilever, said: “Unilever is committed to accelerating the transition to clean transport solutions, not just in our own operations, but along global value chains, as we work to achieve net zero emissions by 2039. With logistics and distribution accounting for around 15% of our greenhouse gas emissions footprint, it’s important that we work with partners shifting to lower carbon fuels.”

And Leyla Ertur, head of sustainability at H&M Group, believes industry leaders have a responsibility to fight climate change and said: “We have the ambition to become climate-neutral by 2030 and climate-positive by 2040. We truly believe our climate actions should be co-created with our partners. Maersk’s investment in large vessels operating on green methanol is an important innovative step.”

AP Møller-Maersk CEO Soren Skou believes the “time to act is now” and he added: “This order proves that carbon neutral solutions are available today across container vessel segments and that Maersk stands committed to the growing number of our customers which look to decarbonise their supply chains.

“Further, this is a firm signal to fuel producers that sizable market demand for the green fuels of the future is emerging at speed.”