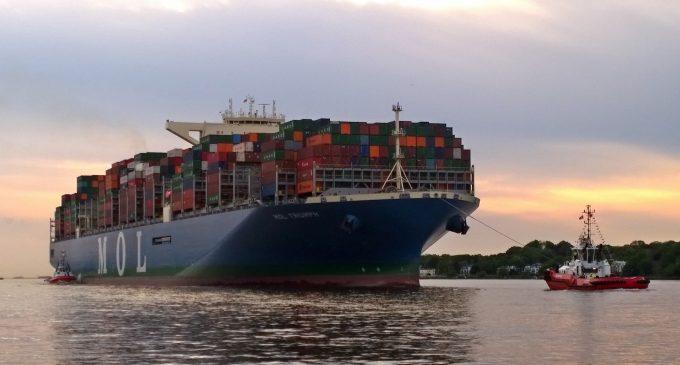 THE Alliance could find itself on the wrong side of a $500 per teu cost differential on the key Asia-North Europe trade due to its members’ failure to order more ultra-large container vessels (ULCVs), according to new analysis from Alphaliner,.

Recently confirmed orders for nine 22,000 teu ULCVs by CMA CGM (Ocean Alliance) and 11 similar units by MSC (2M) have heaped pressure on THE Alliance, whose members are “falling further behind in the megamax vessel stakes”, according to Alphaliner.

Last week saw delivery of the final 15,000 teu unit of 17 ULCVs ordered by UASC, before it was merged into Hapag-Lloyd, and the German carrier said its fleet was “now complete”.

“We have no plans to order any more newbuilds in the foreseeable future,” it stated.

Alphaliner notes that, including its orderbook, THE Alliance will only have 12 ships of 18,000-20,000 teu – six operated by Hapag-Lloyd and six by MOL. This compares with 62 ULCVs for the 2M and 51 for the Ocean Alliance.

Alphaliner added that the remaining THE Alliance partners were “unlikely to place new orders for megamax vessels” as a consequence of “their cash-strapped status and focus on internal reorganisation”.

While THE’s Japanese carriers, NYK, MOL and K Line, are “preoccupied” with merging their liner business – launching next April as Ocean Network Express (ONE) – the other member, Yang Ming, needs to raise new funds in order to reduce its debt mountain.

In a regulatory stock exchange filing last week, the Taiwanese carrier advised that debts due for repayment within one year had reached NT$20.4bn ($670m) against liquid assets of NT$11.3bn ($370m).

The Loadstar’s financial analyst, Alessandro Pasetti, commented that while Yang Ming’s improved trading in recent quarters was “significant”, it was “not enough”, and the carrier needed to urgently raise new funds to cover the maturing debts.

Meanwhile, Hapag-Lloyd announced last week that it would tap the markets this month to raise around another €352m ($414m), “to strengthen our capital structure” and “reduce the leverage of the company”.

A shortfall of ULCVs on Asia-North Europe could “limit future growth” and impact THE Alliance’s “cost competitiveness” suggested Alphaliner.

The consultant quoted a claim from Maersk Line that the unit cost advantage of a newbuild 20,000 teu ship could be as great as $500 per teu against a 14,000 teu vessel.

However, this also depends on the utilisation of the ULCVs and whether additional costs are incurred on voyages, such as due to delayed loading at ports as a result of landside congestion.

However, it seems that even the most doubting of carriers, such as Evergreen which originally questioned the flexibility of the big ships, have now been converted to joining the Maersk-led 18,000 teu-plus club.