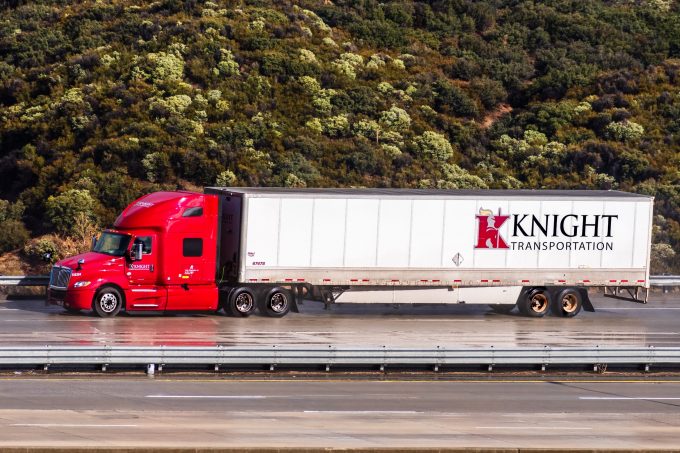 Knight Swift’s latest acquisition, of MME, has given the firm good coverage of the US LTL and truckload market.

But covering the remaining blank areas in Knight-Swift’s US trucking network is going to be more challenging, according to a regional consultant.

Knight-Swift is the largest US truckload carrier by revenue and it has taken a another large step towards establishing nationwide LTL coverage with its second acquisition in this space as reported by The Loadstar Premium, RAC MME, for $150m. In July, it acquired AAA Cooper Transportation (ACT) for $1.35bn.

Knight-Swift CEO David Jackson said, at the presentation of the firm’s third-quarter results: “Diversification has allowed us to grow revenue and earnings across multiple segments and we expect will lead to earnings growth in 2022.”

He says the company intends to invest in both organic and inorganic growth that will support expansion into LTL and third-party carrier services.

Satish Jindel, president of SJ Consulting, regards the MME takeover as a good acquisition, chiefly because of its geographical coverage that complements the footprint Knight-Swift gained with the ACT purchase. He reckons the remaining blank spaces, in the south-west, can be filled with one acquisition, and in north-east US this may also be possible. But takeovers there are more challenging, as the players tend to be family-owned, he observed.

MME reported revenues of $120m last year, while ACT’s turnover was $602m. Both are on a growth trajectory in a buoyant market, which has led to projections of combined revenues in excess of $900m this year.

Mr Jindel estimates Knight-Swift’s LTL business will be worth $2bn by 2023. He sees synergies between the truckload and LTL sides, in aspects like fuel purchases or shifting drivers who don’t want to spend lengthy spells on the road to the LTL network, but he does not anticipate any operational integration.

This view was supported by Mr Jackson, who confirmed MME’s management would remain in place.

For truckload carriers, the LTL sector has become increasingly attractive in the wake of the surge in e-commerce, which has shifted the customer mix from industrial firms to a rising share of retail firms.

In lieu of truckload service to large distribution centres, they require more LTL capacity to feed smaller warehouses closer to markets, Mr Jindel noted. Over the past two years, operating ratios and margins have been superior in the LTL sector, compared with the truckload business, he pointed out.

Meanwhile, it is the second time in as many years that MME, which consists of LTL carrier Midwest Motor Express and logistics firm Midnight Express, has changed ownership. It was acquired shortly before the pandemic by a group led by Red Arts Capital.

MME’s footprint reaches from the upper US Midwest to the north-west, with 34 terminals in 14 states. This complements the network of ACT, which comprises 70 stations from Texas to Virginia and to the Midwest.

“MME is our next step toward a nationwide LTL network,” said Mr Jackson. “While preserving and supporting MME’s identity and culture, we expect to bring many synergies. MME and ACT have minimal regional overlap, and we expect they will be a benefit to one another.”

The combined MME/ACT network covers more than half the continental US market. On its quest for nationwide coverage, Knight-Swift has two areas left to bring into the fold: the south-west (California, Nevada and Arizona); and the north-east.

Against the odds: Trucking income growth not (yet) enough to cheer animal spirits

Screening for value drivers ain’t that difficult, but…

And pays nicely, too

PRESS RELEASE  Knight-Swift Expands Its Less-Than-Truckload Footprint in 15 States Through the Acquisition of Midwest Motor ...

SEEKING ALPHA reports: – Knight-Swift Transportation (KNX +3.8%) shares on the rise after the company posted a strong earnings beat as ...

On the wires: JB Hunt skyrockets – enter the 'knocking on doors' effect

We haven’t been here before (with the parts), but…

Against the odds: ArcBest's M&A hedge leaves all in awe