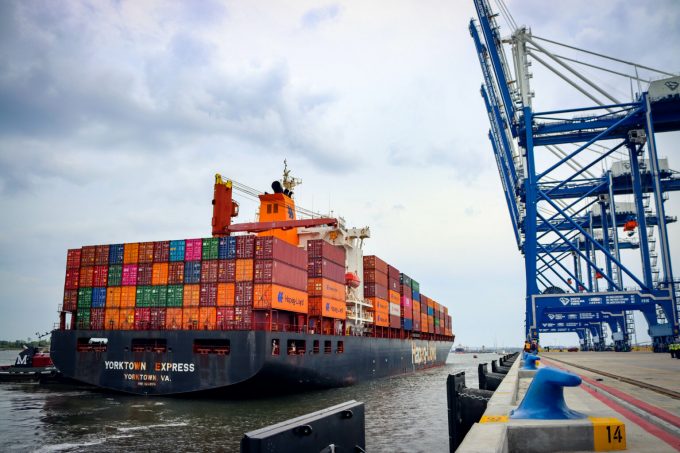 The US east coast is set for another bruising encounter between a dockworker union, shipping line and terminal operators.

The International Longshoremen’s Association (ILA) has launched legal action against Hapag-Lloyd and the US Maritime Alliance.

At the centre of the claim is the new Hugh K Leatherman container terminal at the port of Charleston, the first new box capacity in the US for over a decade when it opened this month.

The first vessel call was by Hapag-Lloyd’s 3,200 teu Yorktown Express, which arrived on 9 April and is the focus of an ILA claim for $200m in damages.

The ILA says the labour operating the new terminal are not ILA members and handling the vessel breached the master contract between the ILA and the US Maritime Alliance (USMX) – the organisation that represents carriers and terminals in master contract negotiations with the ILA.

The ILA claim, filed in the Superior Court of New Jersey, Essex County, says: “The Leatherman Terminal has been under construction for years and, at various times during the past 24 months, the ILA has reached out to USMX for assurances that the terminal would be one where all container and ro-ro work that has been historically performed by the ILA would be performed by the master contract bargaining unit, consistent with the work jurisdiction provisions of the master contract. USMX failed, and refused, to give the requested assurances to the ILA.”

It adds: “On the contrary, the information the ILA received was that the Leatherman Terminal would have non-bargaining unit workers employed in various positions unloading containers from ships and handling containers in the marine terminal, instead of longshore workers represented by the ILA who are covered by the master contract.”

It also says the carrier and USMX had been made aware that calling at the terminal would represent a breach of the master contract, which most recently was renewed in 2018.

It says: “USMX was aware that Hapag-Lloyd intended to bring its ship to Leatherman Terminal on 9 April 2021. Upon information and belief, USMX did not do anything to dissuade Hapag-Lloyd from utilising the non-bargaining unit labour and, indeed, may have encouraged them to do so.

“Both Hapag-Lloyd and USMX were well aware that the work in question would have been handled by ILA members who are covered by the master contract if the ship had gone to other the east and Gulf coasts of the United States, including all the marine terminals in New Jersey.”

According to the eeSea liner database, the Yorktown Express is deployed on THE Alliance’s AL3 transatlantic service.

However, it would also appear that there could be further alleged breaches of the ILA-USMX master contract, given that the terminal has also been selected to serve THE Alliance’s EC2 Asia-US east coast service as well as the Ocean Alliance’s AWE2 round-the-world service.

The Hugh Leatherman Terminal has been over 20 years in the making, according to SCSPA chief executive Jim Newsome, and represents one of the largest facilities on the east coast. The first berth is capable of handling vessels up to 20,000 teu and adds 700,000 teu annual handling capacity at Charleston.

Ultimately, there will be three berths and an annual handling capacity of 2.4m teu.