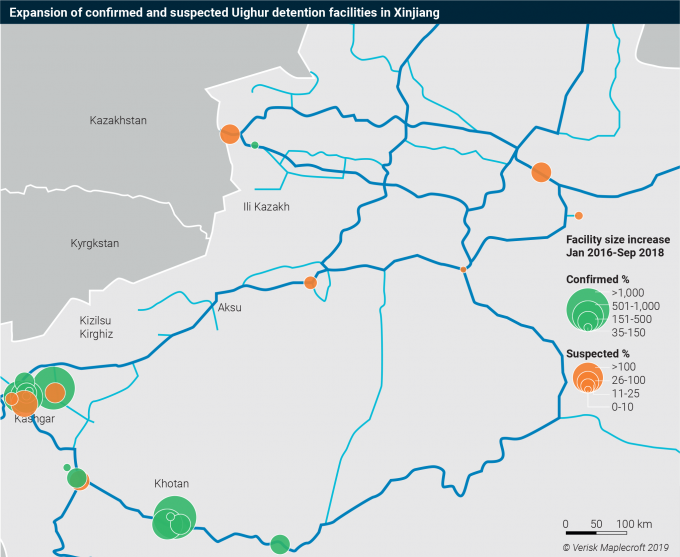 Food and hi-tech electronic supply chains have been warned they may be caught up in the growing use of forced labour in China’s western Xinjiang province.

The province is home to China’s Uyghur ethnic minority, which in recent years has been the subject of a government crackdown that has seen up to a million people detained in internment camps, amid reports of human rights violations, according to global risk analysis company Verisk Maplecroft.

“As more reports emerge about human rights abuses in China’s Xinjiang region against the indigenous Uyghur population, the likelihood of more companies being swept into controversy over the use of forced and child labour in Xinjiang increases,” said its senior commodities analyst, Ryan Aherin.

“The supply chains of apparel brands have already been linked to labour rights abuses, but there is evidence to suggest these violations could move beyond the sector and even China’s borders, as raw materials produced in Xinjiang are being used in manufacturing in other countries,” he added.

The official Chinese government line on the camps is that they are for re-education, to integrate Uyghurs into Han Chinese society and “improve their economic wellbeing“.

However, there have been widespread reports that the camps are also being used as manufacturing facilities, using forced and child labour, particularly in the food and apparel sectors, despite government denials.

“We researched reports in Chinese language media that contained statements from government officials about the types of ‘vocational training’ that detainees are receiving in the camps. These state that many camps provide training in apparel and footwear manufacturing, food processing and electronics manufacturing,” said Mr Aherin.

“It is likely that if components for these sectors are being made by detainees, the government will do its best to make them untraceable to other supply chains.”

He added that the greatest raw material risk was linked to the production of cotton. China is the world’s largest producer and, according to China’s National Bureau of Statistics, 74.4% of its cotton is produced in Xinjiang.

“According to our commodity risk assessment, Chinese cotton has been directly linked to child and forced labour, as women and children have had to work in the cotton harvest to make up for the lost wages of detained men.

“Due to the prevalence of Chinese cotton in the global apparel industry – China is a major exporter of cotton-based textiles to other garment producers in the region such as Bangladesh, Cambodia and Vietnam – links to abuses in Xinjiang are likely to spread well beyond China’s borders.

“Other materials to look out for include cashmere wool, which is often imported into the region from Mongolia to be processed in factories,” Mr Aherin added.

Xinjiang is also on the key gateways of China’s Belt and Road with its strategic location adjacent to Kazakhstan and as a host to one of the main rail arteries connecting Europe with Asia.

“As China expands its Belt and Road initiative, Xinjiang will be a major springboard for Chinese economic activity into Central Asia. The region’s importance is one of the driving factors behind Beijing’s tightening grip over Uyghur communities.  Therefore, abuses faced by local communities are also likely to escalate,” Mr Aherin said.