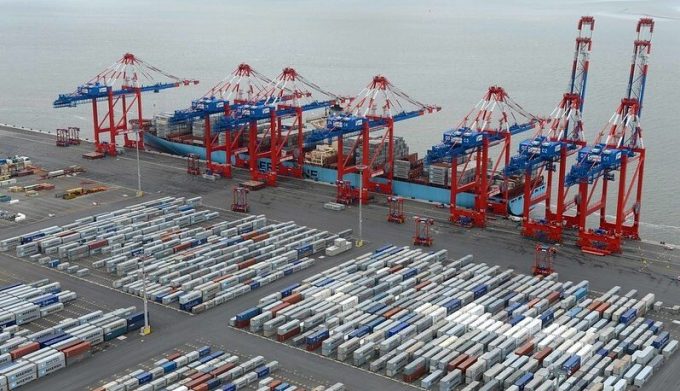 Hapag-Lloyd has confirmed it has taken a 30% stake in Germany’s JadeWeserPort at Wilhelmshaven and a 50% share in the port’s rail terminal.

German-based terminal operator Eurogate won the concession to operate JadeWeserPort in 2006, in partnership with Maersk’s APM Terminals, which took a 30% stake. Unconfirmed reports suggest Eurogate retains its 70% share in the port and rail terminal, which suggests Hapag-Lloyd has acquired Maersk’s stake.

Originally mooted in 2001, JadeWeserPort opened in 2012, backed by the states of Lower Saxony and Bremen, and it was thought that it would offer extra capacity to the busy port at Bremerhaven which was fast approaching operating capacity.

One observer writing in 2011 said: “Experts forecast a doubling of container handling capacities in German seaports within the next 10 years. Furthermore, because containerships are getting bigger, the demands on seaports are mounting. They have to be accessible for the mega-carriers of the future.”

Considered ideally placed, the port at Wilhelmshaven boasts a navigation channel with a draught of 18 metres and a short approach of 23 sea miles, with a large turning area. This compared favourably with the river ports at Hamburg and Bremerhaven.

JadeWeserPort serves the feeder and shortsea market to Scandinavia, Finland, the Baltic states, Russia and the UK and has hinterland connections through road and rail services.

APM Terminals says the port has 1.3m square metres of terminal space, with a 1,725-metre quay and a handling capacity of 2.7m teu, with 1,000 reefer plugs.

The consideration paid by Hapag-Lloyd for the share in JadeWeserPort was not disclosed.