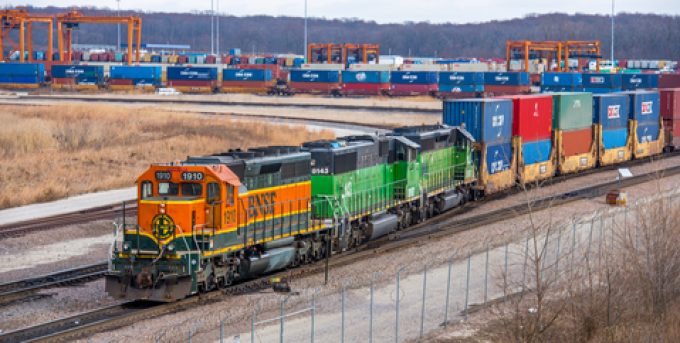 To frustrated US shippers, going intermodal is proving a shaky alternative to the maxed-out trucking market.

Rail giant CSX provided the latest setback last Thursday with the announcement it would restrict the number of domestic containers it accepts from Chicago.

It was the second time in two months CSX has restricted intermodal traffic.

The other Class I rail companies have also metered intermodal traffic in various traffic lanes to alleviate pressure on clogged-up inland terminals – above all in the vital Chicago area.

And the congestion has taken its toll on performance: according to intermodal marketing firms and industry observers, service standards for intermodal cargo have slipped under the relentless flood of imports pouring into the US. According to one report, it can take up to a week to secure a gate reservation in Chicago.

Industry consultants and traffic management systems providers have advised shippers to use more intermodal options to cope with the dearth of trucking capacity, and despite double-digit rate increases, intermodal is competitive from a cost perspective, but the deterioration in service levels is undermining its appeal.

Traffic statistics for July from the Intermodal Association of North America (IANA) indicate traffic barely grew in July, advancing 0.5% year on year. The previous month it was up 12% on a year earlier. Domestic containers and trailers declined, slipping 5.9% and 7.5%, respectively, while intermodal volume was up 7.8%.

The congestion in the system, combined with eye-watering demurrage charges, prompted a crescendo of protests from importers and shippers as well as intermodal service providers, which caused the administration to take action.

On 22 July, Martin Oberman, chairman of the Surface Transportation Board (STB), wrote to the Class I rail companies asking them to explain their demurrage charges and report the numbers of containers in their systems. His letter expressed “my concerns about significant disruptions within the aspects of the international intermodal supply chain that involve the Class I freight rail network”.

The rail carriers have refuted accusations of ‘bilking’ shippers, arguing that they were actually to blame for congestion because they were not picking up containers fast enough, or holding on to them longer than normal. Demurrage charges and the metering of traffic in certain lanes were necessary measures to shorten container dwell time and bring down congestion, they argued.

A major stumbling block has been a shortage of chassis. Recent efforts to relieve this by creating a neutral chassis pool in Memphis, with the assistance of the STB and the Federal Maritime Commission, failed to make progress because of resistance from chassis providers, which have exclusive contracts with shipping lines.

For shippers, all this spells more misery ahead as the peak season shifts into high gear. Several large rail companies have reactivated shuttered facilities to take pressure off the system, but the situation remains characterised by capacity shortages and lower service levels.

The FTR Shipper Conditions Index, which tracks demand, rates, capacity and fuel prices in the full-load market, declined in its latest reading, and the outlook remains grim.

“The capacity situation is expected to remain tight into 2022 and, while rate increases are expected to moderate their rates of growth through the next several months, they will for the most part remain in positive territory, meaning shippers’ rate relief might feel good, but it is a matter of degrees, as rates will still be going up year over year,” predicted Todd Tranausky, VP of rail and intermodal.

And this tallies with predictions from elsewhere: IANA projects intermodal volumes will climb 9% this year, with domestic container numbers traffic  up by about 6% and trailers advancing 1.5-2.5%; CSX and Union Pacific both told investors this summer they expected intermodal congestion to last until next year.

After last week’s tripartite meeting, when regulators agreed to collaborate to find solutions to failing ...

Against the odds: The supply chain mess – did you enjoy Christmas in July?

If you haven’t completed your supply chain planning for Christmas, chances are it’s already too ...