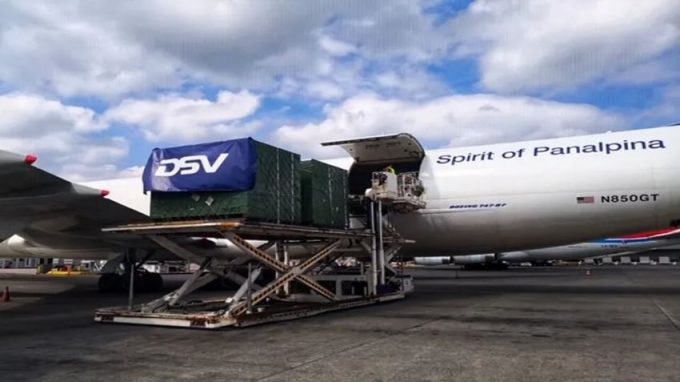 DSV and Kuehne + Nagel have both claimed above average performance in air freight, with figures also boosted by acquisitions.

DSV CEO Jens Bjorn Andersen said: “We are happy to be able to say that we have actually gained [airfreight] market share in Q2. We have seen an organic development of -4% for DSV, but we do estimate that the market is worse than that, being in reverse, so to say, with between -7% and 10%.

“So we have actually been able to grow faster than the market, and a little bit earlier than we had actually estimated.

“What pleases us also is the fact that we have continued to see a very good development in the yields going from Dkr11,400 now to Dkr12,500 in the quarter. So no deterioration in yields and this is something which, of course, has underpinned also the ebit development of the quarter.”

However, he told analysts yields were likely to come down as rates softened – “I think it’s a natural consequence,” he said.

“We are maybe a little bit more conservative [and] risk-adverse. You can have a long debate about what the right strategy is. We have some capacity at hand but at good terms, but we have always felt the right thing for us is to be short in the market. This is probably also why we’ve been able to see the conversion or the yields increasing in the quarter.”

CFO Michael Ebbe added that DSV had some lanes where it had committed to, and locked in, capacity, while it also has its Panalpina charter network.

“We have said all the time that we aim for market share growth. This is still the ambition of DSV. Then it can vary a little bit from one quarter to the other. So we cannot sit here and guarantee that we will outgrow the market, but we hope at least that to be the case going forward, once the [Agility GIL] integration is over. I said it was a little bit earlier than we had estimated, because we haven’t seen the full effect of the volumes that we said goodbye to deliberately at the beginning of the acquisition. But we still have an ambition to grow faster than the market, both for air freight and sea freight.”

He added that hi-tech and pharma had been strong.
K+N’s outgoing chief Detlef Trefzger, meanwhile, said that it too had beaten the market, but acknowledged that it had been “clearly hit by the Shanghai lockdowns in Q2”.

He added: “And only in June we faced a volume reduction in the market and was in our networks of minus 19%. This is recovering now, and we see a strong trend towards growing volumes again.”

But he claimed: “Our organic growth is robust. Kuehne + Nagel legacy business is growing quite well on all trades. And pharma and aerospace is up, volumes are up with double-digit growth.”

K+N is currently flying some 65% of its shipments by freighter, with the remainder in bellies – and that the proportion looks likely to stay.

“I don’t see a major change in the next couple of months or quarters, for the reason that now is the peak season for passenger planes, even intercontinental, as the summer vacations are kicking in almost everywhere globally.

“But for the winter season, the belly capacity will be reduced, that’s for sure. And still, some of the major markets are not offering a free entry into the country like China, which also limits the number of belly capacity into one of our strongest or most important markets.”

The Swiss forwarder has its own chartered aircraft coming into service in the third and fourth quarters, under an agreement with Atlas Air for two 747-8Fs.

“For the rest, we will go to the relevant markets,” said Dr Trefzger.

You can read a more detailed analysis on The Loadstar Premium here.

Bottom-fishing in and out