News / DHL avoids involvement in Atlas pilots dispute, despite protest at US HQ 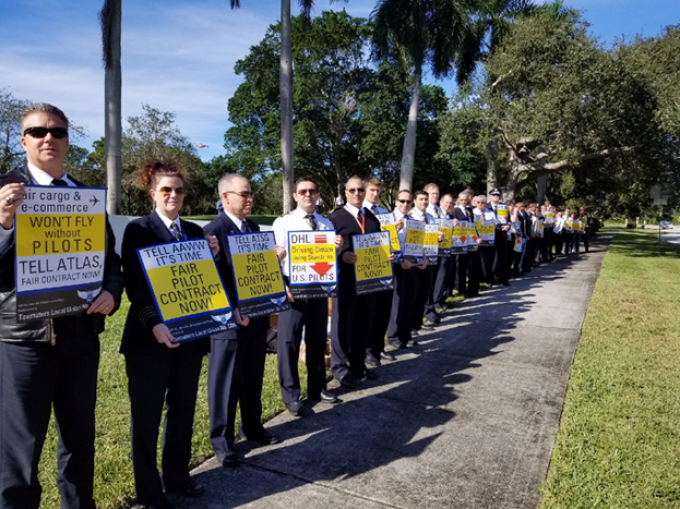 DHL has distanced itself from a pilot protest at its US headquarters yesterday.

Pilots who fly for Atlas Air and ABX Air on behalf of DHL protested in an effort to ramp up pressure on the airlines to improve working conditions.

Germany’s Deutsche Post-DHL is one of Atlas’s largest customers and is Atlas-owned Southern Air’s only customer.

But despite the pilots’ attempts to lobby DHL to put pressure on the US airlines, the customer was careful to steer clear.

In a statement to The Loadstar, a DHL spokesperson said: “The pilots who are raising these issues work for our airline partners. DHL is not a party to the negotiations between our independent suppliers and partners and their employees.

“We continue to expect that our services will not face any disruption and we look forward to supporting our customers with their international shipping needs.”

As a non-US company, DHL is not allowed to majority-own, or be seen to exert a level of influence comparable to a majority owner of, a US airline. However, it is close to the limits: it owns 49% of Polar Air Cargo and is a significant customer of the Atlas group and ABX Air.

The Airline Professionals Association Teamsters union said: “For years, management at all three carriers [Atlas, ABX, and Southern] have been stalling negotiations to improve their outdated contracts.

“They argue they can maintain and attract a sufficient number of pilots to work for them at current wages, terms and benefits that are below industry norms.

“But pilots say the carriers’ strategy is not working and is impeding their ability to succeed long-term with customers like DHL – especially in light of the international pilot shortage.”

The protests followed the release of the results of a survey of Atlas and ABX pilots, which found 75% believe customers, including DHL, are being misled over the problems facing both carriers.

Furthermore, some 60% of those polled said they would be leaving their jobs at the carriers to work for DHL competitors, including FedEx and UPS.

“Pilots say DHL should be paying attention to these warnings and use its power to help the carriers agree to an industry-standard contract,” said the union. “[The pilots] call on DHL to improve workplace standards and end this exploitation of workers and their families.”