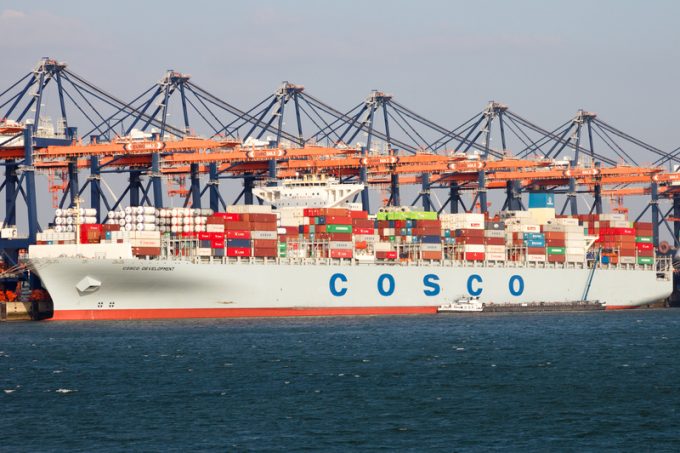 Chinese container terminal operator Cosco Pacific is set for a presence at Rotterdam after agreeing to acquire a 35% in the port’s Euromax terminal from ECT-owner Hutchison Port Holdings.

In a statement to the Hong Kong Stock Exchange, Cosco Pacific, the Hong Kong-listed terminal operating unit of the newly merged Cosco and China Shipping COSCOCS, said it had signed a sale and purchase agreement with HPH’s Dutch subsidiary, ECT, to acquire the stake for €125m – €41m for the shares and €84m for 35% of a €240m outstanding loan held by Euromax.

The semi-automated terminal was the last facility built in Rotterdam’s Maasvlakte I area and began operating in 2008. In recent years it has served as a dedicated hub for the Asia-Europe services of the CKYHE alliance, and Cosco indicated it is likely to continue to do so.

“The board believes that, based on the medium- to long-term development trend, Rotterdam will continue to be Europe’s main hub. That port has been the base port of COSCO Shipping in north-west Europe for a long time,” it said in a statement.

Last year it handled 2.28m teu in an area with an annual capacity of 2.55m teu. It currently has a quay length of 1.8km and depth alongside of 16.65 metres. A second phase of development is scheduled to increase annual capacity to 3.2m teu.

“The board expects COSCO to continue to deploy ultra-large container vessels on the European shipping route and call at Rotterdam as its major hub in the region. The company’s investment in a container terminal in the port of Rotterdam is not only in line with the Company’s strategy of investing in overseas hubs, but also coordinates with COSCO’s hub strategy, resulting in a good synergy,” Cosco Pacific added.

However, the investment could put it on a collision path with its soon-to-be alliance partner CMA CGM, which is a shareholder in the recently opened Rotterdam World Gateway on the Maasvlakte II, along with G6 members Hyundai, APL and MOL and terminal operator DP World.

The 2.3m teu capacity terminal opened for operations last year and is currently used by both the G6 and O3 Alliance, but assuming that CMA CGM’s acquisition of APL goes ahead it will become the largest shareholder in RWG.

Meanwhile, the French carrier is also set to launch a recalibrated Ocean Alliance with COSCOCS, OOCL and Evergreen next April – but given this week’s development there is likely to be considerable debate over which terminal will act as the grouping’s Rotterdam hub.