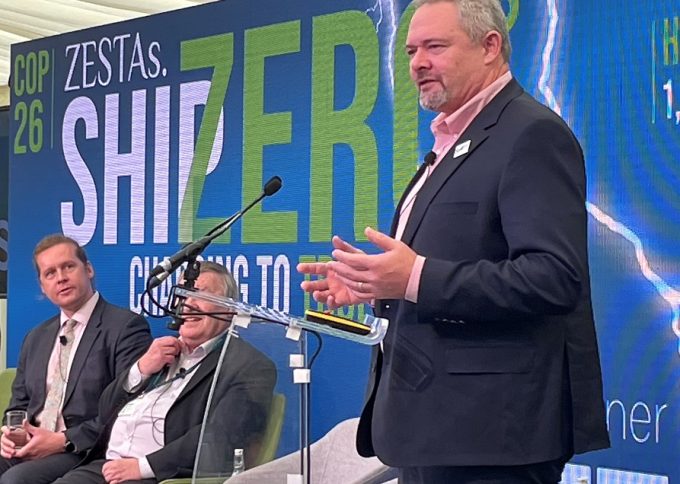 Climate transition financing has come to the fore before and during the COP26 event in Glasgow, but it is rare to find a finance solution that is bundled with a technological innovation.

Canada-based Shift Clean Energy, formerly known as Sterling PlanB Energy Solutions, has brought an “innovative and complete” solution to port pollution that can be used to decarbonise all the ports in the world, CEO Brent Perry told the Ship Zero conference, which ran in parallel to COP26 last week.

He said the solution comes with zero capital investment from the ports themselves, while reducing operational costs by a third and improving the health outcomes of the population living in the vicinity of the port, itself reducing health care costs.

One of the world’s largest ports, Singapore, has started the process to transition to electric power with the new technology that will see wind-generated energy stored in batteries.

In the first instance, Shift will use its own cash to fund the capital investment in the Singapore electrification system, as well as a US west coast port that cannot be named at this stage, according to Mr Perry, which is also a backer of Ship Zero conference organiser the Zero Emissions Ship Technology Association.

The new  system, known as PwrSwäp, will use an offshore wind generation plant in the first instance as there is a premium on space in Singapore. The chargers will be supplied with battery cartridges via a ‘charge barge’ which will ferry the cartridges to the port area and lift them, via the vessel’s own cranes, into position. The battery cartridge will simply slot in, with no danger to the operator.

Spent cartridges are transported to the water charging point for recharging at a slow pace, which prolongs the life of the battery while the power to the port is maintained.

Mr Perry told The Loadstar Singapore would need another three charging islands, but the port could be fully electrified within six to seven years.

Meanwhile, Shift is negotiating with banks and private equity groups for more funds and added:  “We will be sitting down with our Poseidon Principle friends to bring them in as another syndicate to the funding.”

He says all the investment risk is taken by Shift, while a port that converts to electric power can make significant port savings.

According to Mr Perry, the technology has already passed type approvals and has the necessary permits to operate so the technology can be implemented quickly.

“The port in the US will see 32% reduction in operational costs from day one,” he said, because the end user pays for the energy on a pay as you use basis.

“But it’s not just the port emissions you have to consider. The lifespan of the population [currently] living in the vicinity of ports has been reduced, while health care costs are much higher due to the pollution.”

Port users will also see reductions in costs, he added, bringing further benefits down the supply chain, eventually to the consumer.

Shift is already converting the US port and has made a start on the Singapore electrification, but Mr Perry said the company had presented to 14 potential customers in Asia, Europe and the US, and converted them all into buyers of the system.