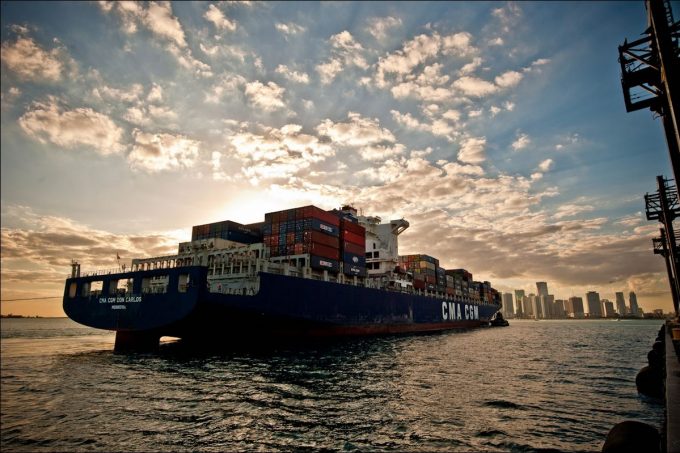 The number of container lines with an operating capacity of over 200,000 teu has reduced to 17 from 20 in the past year, and is set to shrink to 13 in the next 18 months as the industry experiences unprecedented consolidation.

CMA CGM’s acquisition of APL and the integration of Chinese carriers CSCL and Cosco, together with the demise of Hanjin, accounted for the contraction in 2016.

The proposed merger of Hapag-Lloyd and UASC, the takeover of Hamburg Sud by Maersk and the joint-venture between K Line, MOL and NYK will cut the “premier division” ranks this year.

According to Alphaliner, the overall operated capacity of the current 17 main carriers shrank by 1.3% between January 2016 and January 2017, after taking into account the removal of Hanjin’s tonnage.

The consultant calculated that collectively the top 17 container lines control 81.2% of global capacity, down from the 83.7% controlled by the top 20 a year ago.

Notwithstanding Hanjin, which was the seventh largest carrier and operated around 572,000 teu of capacity at the time it entered receivership, there were five carriers that reduced their capacity year-on-year. Israeli carrier Zim recorded the largest cut, 14.8%, while MOL and K Line lost 10.6% and 7.7% respectively.

Soon-to-be-acquired Hamburg Sud was also forced to rationalise its fleet, due to weak trading in its core South American trades, and cut back its tonnage by 6.6%.

CMA CGM added to its operating capacity by 17.3%, following the acquisition of APL, but saw its aggregated combined capacity fall 9.3% after outsourcing a substantial part of its feedering service.

Maersk, including its Safmarine, Sealand, MCC and Seago brands, with a total cellular capacity of 3.3m teu remains comfortably at the top of the tree, and will further be boosted by Hamburg Sud’s 604,000 teu fleet – although the Danish carrier could opt to off-hire surplus ships when it takes over the business.

Second-placed MSC last year “took on a massive amount of new ships”, noted Alphaliner. An aggregate capacity of 303,000 teu, represents a 6% increase in its operated fleet and include 10 additional 19,000 teu ultra-large container vessels.

With a “minor clear-out” of its oldest tonnage to the scrapyard and the off-hiring of some chartered-in tonnage, MSC gained 160,000 teu last year and it now operates a fleet totalling 2.8m teu.

Interestingly, all of new ships are leased and underpinned by long-term charters – it now has 62% of its fleet on charter, compared with Maersk’s 46%.

In third place in the rankings is CMA CGM, with an operating capacity of 2.1m teu, followed by Cosco in fourth with 1.6m. Evergreen is currently fifth at 993,000 teu, but the Taiwanese carrier will be demoted after Hapag-Lloyd and UASC complete their merger, which will give the combined entity 1.5m teu.

Outside the top carriers, the X-Press feeder group, with an operating capacity of 158,000 teu, now ranks as the world’s 18th-largest container line.