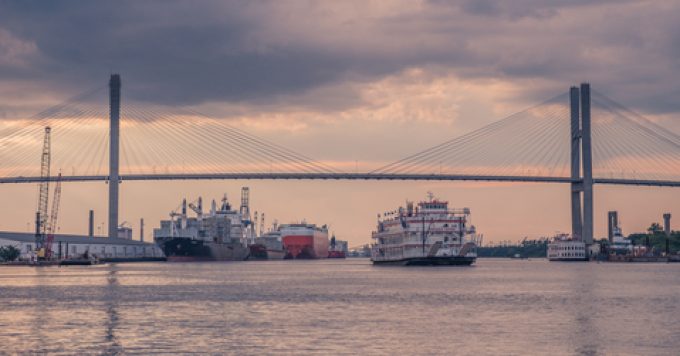 Georgia Ports Authority is leaning on US exporters to pitch in to help reduce congestion at the port of Savannah.

It is moving to fixed dates for export containers to be dropped off at the port, reducing the leeway exporters have to bring in their boxes.

The port authority is also working with ocean carriers to align drop-off times, in a bid to reduce the likelihood of shipments getting rolled.

Containers that miss their designated sailing are not automatically loaded on the next vessel and may miss two or three sailings before they are shipped. This not only causes delays for shippers, but also means boxes sit longer at the terminal, adding to the congestion.

US exporters have had some issues, primarily with the availability of containers, but the new policy at Savannah is not caused by problems with exports, noted Craig Grossgart, senior VP global ocean at Seko Logistics.

“This is not an export issue. It’s a space issue for imports,” he said.

Some ports have embraced the concept of earlier receiving dates for exports, but critics have pointed out that vessel delays could play havoc with this.

Mr Grossgart reckons the measure should help, reasoning that metering appointments for exports should result in steadier flows, although it does reduce flexibility for exporters somewhat.

“Given the dire congestion situation, this makes sense,” he said. “Savannah is one of the most customer-centric ports in the nation. They wouldn’t have done this unless it was absolutely critical.”

Savannah has struggled with a significant surge in traffic this year. Last month, it handled 472,000 teu, 14.5% higher September 12 months earlier, and the strongest result for the month in its history.

According to one report, an official in the tourism industry recently observed that visitors were coming to Savannah just to see the backlog of ships.

Going by the relative size of respective container throughput, a backlog of 27 ships at Savannah is equal to about 75 at anchor at the Los Angeles/Long Beach complex, Mr Grossgart noted.

The situation has prompted carriers to divert sailings to other US east coast ports. Hapag-Lloyd recently notified customers it would suspend calls at Savannah in mid-November and go to Jacksonville instead. CMA CGM will shift calls to Charleston next month, to “protect schedule integrity”, citing delays of eight to 10 days due to congestion at Savannah.

The congestion has driven the average dwell time for incoming containers at the port to 11 days. Outbound containers sit seven days, on average, at the terminals.

For some exporters, the port authority’s tighter line on container drop-offs could be a problem, said Mr Grossgart.

“If you have a facility that can only load three containers a day, and you try to put 15 containers on a single bill of lading, that’s a problem. You may not be able to load all containers you want to,” he explained.

And manufacturers that can’t speed-up their output to match the narrower windows for export drop-offs, will be struggling, he added.