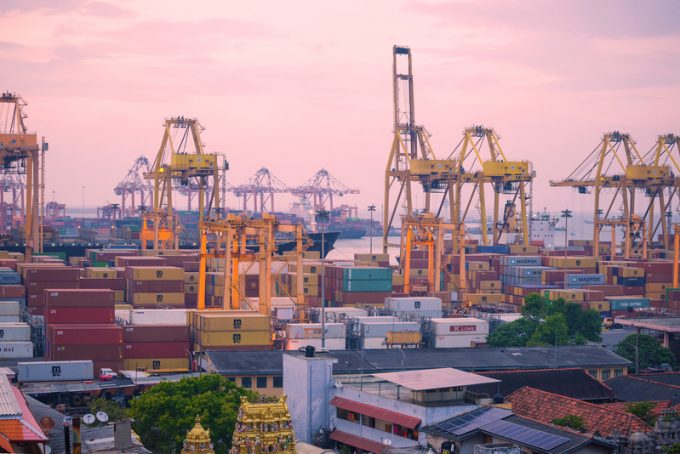 A backlog of 50,000 teu at the port of Colombo is causing chaos for South Asian transhipment cargo.

The capital of Sri Lanka has been under a Covid-lockdown for the past couple of weeks, while a labour shortage at the city’s container terminals has caused congestion since early October.

Now the bottleneck is impacting supply chains in neighbouring India and Bangladesh.

Rohan Masakorala, chief executive of Shippers’ Academy Colombo, said the port of Colombo’s workforce had been reduced by around 30%, resulting in a big hit to crane productivity and inter-terminal trucking.

“The backlog is huge, and could take six-to-eight weeks to clear up,” he told The Loadstar.

“Colombo International Container Terminal (CICT) mainly focuses on transhipment, while the other two terminals handle feeder vessels, so there is a vital need for inter-terminal transfers.

“The lack of drivers meant containers started accumulating in the storage areas of the port, which began impacting feeder vessels – waiting for more than a week, sometimes – and then even mainline vessels were delayed by one or two days.”

Given that Colombo handles around 600,000 teu a month, Mr Masakorala said regional feedering and connectivity was being massively disrupted, with carriers forced to drop off boxes in India, Singapore and Dubai.

He added: “Colombo isn’t the only port impacted by Covid, of course, but as a transhipment hub, the impact is much higher and the whole region is affected. Even now, there are 23 ships waiting for a berth, whereas normally the port receives 12-16 vessels a day, so that’s quite a number out of their window.”

Inevitably, freight rates have doubled out of Colombo, with shippers needing to book up to eight weeks in advance to get a slot, he explained.

“Some shippers have had cargo rolled for four weeks in Colombo and two weeks in Singapore,” Mr Masakorala said. “Freight forwarders were severely affected, as some emergency shipments had to be airlifted or go to a third port to connect, increasing costs and transit times.”

Now there are concerns the port’s reputation could be tarnished, he added, given that rival ports in India, Bangladesh and Pakistan were fully operational. Sri Lanka has big ambitions to become a global maritime and logistics hub, on par with Dubai and Singapore, but Mr Masakorala said less-than-containerload (LCL) clearance and consolidations had been “severely affected”.