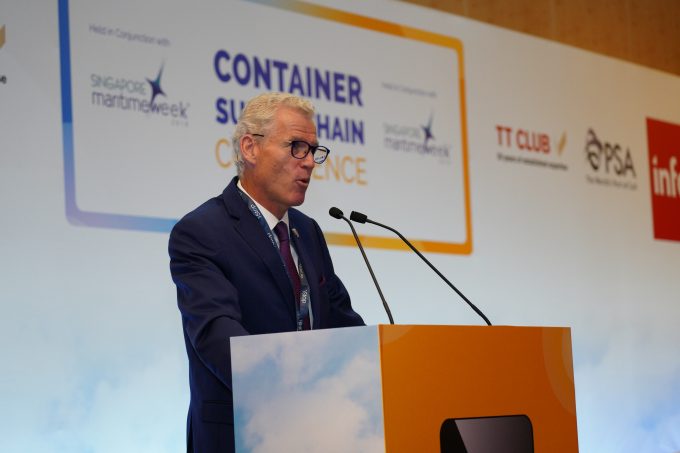 Costly empty container repositioning has been exacerbated by the US-China trade war, as more empty boxes than ever before head back to Asia.

According to Jeremy Nixon (pictured above), chief executive of Ocean Network Express (ONE), the major impact from the trade spat so far has been to increase the existing trade imbalance between the US and China, rather than reverse it.

“The slowdown in US exports to China is one of those unintended consequences of politicians sometimes meddling with economics,” he said at last week’s TOC Asia Container Supply Chain conference in Singapore.

A resolution to the trade tension would be “encouraging and helpful”, said Mr Nixon, considering the equipment imbalance on the transpacific trade is “really quite significant”.

He added: “Half the boxes leaving the US for Asia are actually empty; the situation is pretty serious in terms of how much equipment we have to get back and the round-trip economics of that.”

Indeed, he noted, ONE spends roughly $1bn every year moving empty equipment to align demand with supply, but the carrier is developing AI and machine learning solutions to better forecast where demand will be, and when.

“A key goal is to better forecast patterns and changes so we can be more responsive and put equipment in the right locations, and not always have to rely on individual customer forecasts, which sometimes are not that accurate,” said Mr Nixon.

“There’s massive potential to save costs on empty container repositioning,” he told The Loadstar.

“It’s a huge pain for everybody. There will always be imbalances, that’s never going to be solved 100%, but nonetheless there are companies which do exactly the opposite move, and the xChange platform now has very strong coverage, so you can find containers anywhere in the world on a one-way lease basis.”

Container xChange was created by Boston Consulting Group (BCG) following its 2015 study, which found empty container repositioning costs the industry up to $20bn a year. It was spun-off into an independent company and Mr Loehr said the platform allowed shipping lines, lessors, NVOCCs and freight forwarders to contract one-way leases online, rather than by phone and email. It costs carriers up to $200 per empty box move, he noted.

“Carriers like to supply containers, but they’re also using the platform to find them when they don’t have equipment in certain locations,” he explained.

Mr Loehr said the leases were SOC (shipper-owned containers), meaning instead of using a carrier’s assets, shippers “bring their own container” and only purchase the vessel slot.

“The lease also has many more free days with xChange – generally 30-90 depending on the route – which helps avoid demurrage and detention scenarios.”

With 300 members and 10-25 companies joining every month, the platform covers 2,500 locations globally and Mr Loehr said there were a “few thousand” transactions a month, with intra-Asia representing 55% of the volume.

“When times are good more volumes are shipped and, especially with the vertical integration with the big guys now, there are many more locations where containers end up requiring repositioning,” Mr Loehr added.