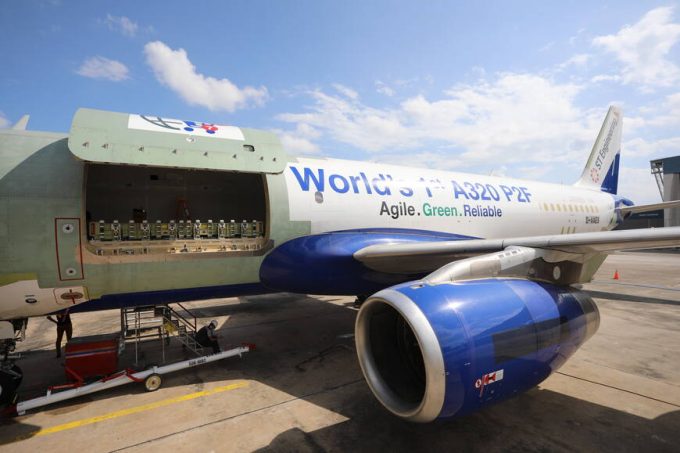 Just a few years ago, the A320 did not seem like a contender for freighter conversion – but with the first aircraft now in its test flight phase, and the market facing capacity shortages, things are about to shake up.

The A320P2F is being developed by Elbe Flugzeugwerke (EFW) and ST Engineering; the conversion commenced last March, with the first flight taking off in December.

Interestingly, EFW revealed to The Loadstar that although the A320 was the first contender for conversion, it decided to kick-off the programme with the A321 instead, after reviewing the more urgent need for an upgrade replacement for the ageing 757P2F.

The A320 should fare well, depending on the success operators have with the A321, in which the single-type operation for an operator will make it cost-efficient to run the A320 in parallel, according to an industry expert.

So far, the narrowbody freighter market for conversions is dominated by 737-NGs, specifically the -800s, so competition in this size segment is expected heat up.

Wolfgang Schmid, VP sales and marketing at EFW, said residual values of the feedstock pre-conversion for the A320, in general, is showing good availability at reasonable pricing, and he highlighted the advantages of commonality with other Airbus types.

“It offers the same cockpit type with the A321, or even the larger A330s, and it is a perfect family player for airlines and operators with a mixed fleet. It’s the same type rating.”

Mr Schmid indicated that the A320P2F family (which also includes the A321) is good for all regional air cargo transport and not limited to certain sectors, such as express or general cargo, due to flexibility in capacities.

EFW highlighted a couple of notable modifications and features of the A320P2F conversion, which include a main-deck cargo door in the forward fuselage on the left side, which is hydraulically actuated and electronically locked; a manually operated cargo loading system, with full support for industry-standard narrowbody ULDs; reinforced floor panels and floor grid to cater for higher running loads; and a Class-E cargo compartment with fire detection and suppression systems allowed only on aircraft used strictly for carrying cargo.

Vallair, the launch customer for the A321F, has been keeping an eye on the market for the smaller A320, while it recently delivered its third A321F to operator SmartLynx Malta.

Patrick Leopold, director of trading and leasing at Vallair, claimed the A320 would likely play a role in this size segment, but he added that it was not quite clear yet as to how it will establish in the market.

“It is likely to complement the fleet family, with the A321 and A330, to be used for ‘right sizing’ on slightly thinner, more regional routes.”

Mr Leopold indicated, however, that like the A321, the A320 featured a containerised lower cargo hold, a new feature in the narrowbody freighter segment.

“It is a good candidate for existing Airbus operators, those who want to enter the Airbus family and specialised, niche operators.”

According to data from Airfleets, the first A320P2F – MSN 2737, currently undergoing flight tests, is a 15-year-old airframe powered by IAE V2500 engines, which are part of the Pratt & Whitney portfolio.

In a recent discussion, an expert from P&W noted that V2500-powered A320 and A321s had entered the sweet spot for conversion, with the right vintages becoming available. That sweet spot balances the acquisition costs and the remaining life in the aircraft and enables the value proposition to work out for conversion.

TAP Air Portugal has taken its first – and possibly last – tentative step into ...