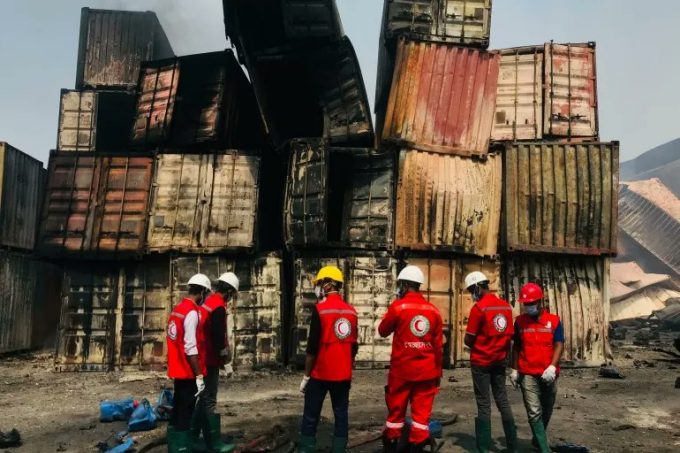 Corpwatch: “We haven’t found any basic fire safety measures. There were simply some extinguishers. Nothing else. They didn’t follow storage guidelines for hazardous chemicals." Credit Corpwatch.
By Nick Savvides
10/06/2022

Initial responses to the Chittagong fire disaster have ranged from anger to sadness.

But this has happened before; and many believe the rage and upset ultimately turn into apathy.

The tragedies in Tianjin in 2015 and Beirut in 2020 were very similar in many ways; there is certainly a sense of deja vu, suggesting little has changed. It’s too easy for the industry to let the narrative to blow itself out, allowing yet another meaningless tragedy to pass into history.

While callous and a little uninformed, this jaded view can perhaps be excused by the fact that a tragedy of massive proportions involving dangerous goods appears to happen every few years. And not just in ports, but on ships too.

What is more, these events are predictable – and have been predicted. After the 2020 Beirut fire, Richard Brough, the head of the International Cargo Handling Coordination Association (ICHCA), said: “Another Tianjin is waiting to happen all over the world.”

Mr Brough also pointed out that there are “stringent regulations governing hazardous cargoes, but some people are ignoring them, while the IMDG (International Maritime Dangerous Goods) code is fully legislated and followed, but there are no land-based regulations”.

James Hookham, director at the Global Shippers Forum (GSF), said one of the problems with international regulations is enforcing them across national boundaries.

“Ports are on sovereign territory, so they are governed by the regulations laid down by national governments, [port regulation] is not a role for international convention because you always end up with the problem of how to enforce it,” he said.

He did, however, point out that there are plenty of examples of good practice in the protection of ports and local populations from dangerous goods, as well as a lot of guidance which can be copied. “There is no copyright on the principles of good practice,” he said, adding that “there is a lot of experience and accumulated knowledge that has gone into producing that guidance”.

Both ICHCA and the GSF belong to the comparatively newly formed Cargo Integrity Group, which is composed of companies and organisations dedicated to finding safe solutions to critical issues within the maritime supply chain.

In December last year ICHCA produced a white paper that had been prompted by the Tianjin and Beirut disasters. The ICHCA paper concluded: “A common cause [of accidents involving dangerous goods] is generally understood to be incorrect handling and storage. This includes segregation of the dangerous goods stored and is often combined with issues related to prolonged storage which can influence the stability of the dangerous goods.”

An industry insider, who is not based in Chittagong, told The Loadstar that looking at the photographs and reports of the Chittagong event, the immediate thought was that “the approach was all wrong”.

Some eight fire crew were said to have died fighting the blaze at the BM Container Depot in Chittagong. “Pictures showed fire-fighters standing around and others spraying water onto an unknown fire,” said the source.

According to guidance, no-one should approach a fire until it is known what is burning inside the container, and what is in nearby containers “so that you know what you’re dealing with,” added the source.

What is more, there should be a plan to deal with these events if they do occur, and that might include keeping an up-to-date inventory of the dangerous goods, and making that available to emergency services, ensuring that there is a description of the cargo, and what their properties are.

Critically, there also needs to be a central point of contact who will co-ordinate a response.

Peregrine Storrs-Fox, of insurer TT Club, makes the point succinctly. “Safe warehousing applies here. Good advice must get into the hands of people who really need that advice. All these incidents demonstrates that this advice is not being followed.”

The Cargo Integrity Group has lobbied for changes to be made to the IMO’s inspection programme, which requires states to inspect and submit reports on inspections of cargo transport units (CTUs) as they are called, with a view to submitting reports to IMO.

However, only five nations had submitted reports, said Mr Storrs-Fox, though more may have inspected cargoes, without submitting a report. Up to this year, only CTUs with declared dangerous goods were inspected, but the latest IMO Guidelines For the Inspection of CTUs, approved in May this year, says that all containers must be looked at.

In 2015 the Tianjin disaster claimed 170 lives with hundreds injured. The Beirut explosion killed more than 200 in 2020, with thousands more injured and many others left homeless and/or unemployed.

Thankfully, the Chittagong event has not been such a large scale, with the number of dead now revised to 44, but all of these deaths and injuries were avoidable. And while the death toll from dangerous chemical cargoes at sea is much lower, with five dead on the Maersk Honam for instance, all fatalities must be mourned.

Moreover, the environmental impact of these events can be long lasting. Who can forget the fire on the Zim Kingston off the west coast of Canada last year, with containers lost overboard? Or the X-Press Pearl which caught fire off the coast of Sri Lanka, depositing container loads of plastic pellets into the ocean, contaminating the ocean environment and hitting the local fishing industry?

Mr Storrs-Fox concluded: “All these incidents involving the tragic loss of life should make us sit up and ask, ‘what happened?’”

But then actions must follow, not just in Tianjin, Beirut and Chittagong, but in all ports, terminals, warehouses and ships where dangerous goods are handled. So that we can consign these terrible accidents to history across the globe.