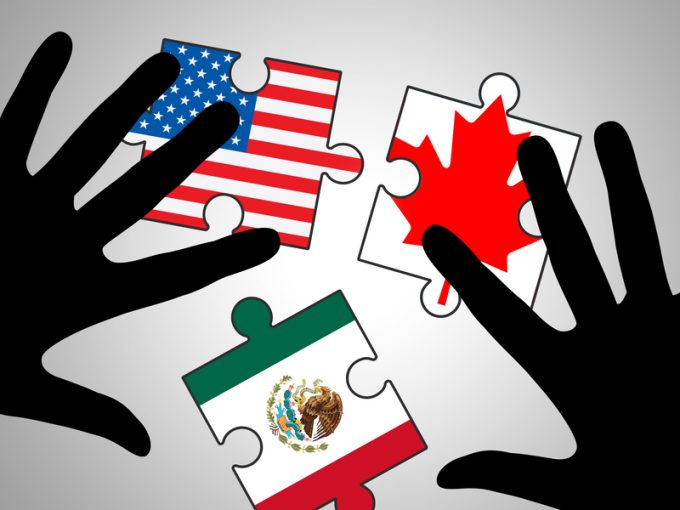 The national governments in the USMCA zone, the US< Mexico and Canada, have closed their borders with each other to non-essential traffic, but trucks are free to roll across.

However, after a spike, trucking activity is expected to slow down as the repercussions of the economic shutdown hit demand.

When US and Canadian officials announced the closure of their border, they were quick to stress that the restrictions were aimed at stopping non-essential traffic. Cross-border truck and rail moves would not be impeded.

“Supply chains will not be affected by this new measure,” said Canadian prime minister Justin Trudeau.

According to the Cross Border Institute of the University of Windsor, on an average day, about 30,000 trucks cross the border carrying more than $1bn-worth of goods. Closure to freight would have serious consequences, the institute’s directors have warned.

They pointed to the disruption in the aftermath of the 9/11 attacks, which forced automotive plants to shut down because of border constrictions.

When US and Mexican officials announced the closure of their border to non-essential traffic, both sides also stressed that the restrictions would not impact rail or trucking shipments and cargo companies have reported no problems at either border.

“Truck movement at the Canada-US border is still moving reasonably well, given the current situation. FTL is smooth, LTL has been facing an uptick in issues, but only a small increase versus the normal operations,” said Mark Fatica, district director, Canada of Crane Worldwide Logistics. He added there had been no issues with the release of cargo.

“The Laredo/Nuevo Laredo bridge is seeing a normal truck flow, however, slower than usual,” reported Vincent Wyns, managing director Mexico of Crane Logistics Worldwide, adding that the same scenario was playing out at other crossing points.

However, the restriction on personal flows has not resulted in quicker crossing times for trucks, as there are fewer customs agents available on both sides, Mr Wyns added.

Predictably, truckers have reported smoother driving conditions across the US, as private traffic has reduced sharply. On the other hand, it appears to be taking longer to load and unload trucks. In its daily update to customers, Crane reported yesterday that average truck wait times across the country were at a record 159 minutes, reaching as high as 322 minutes in Philadelphia.

And finding trucking capacity has become harder. According to one media report, the load rejection rate has climbed since the end of February and last week reached its highest level since September 2018. US truckers have been enjoying high demand, which has been widely attributed to grocers scrambling to replenish inventory decimated by hoarding in response to the Covid-19 outbreak.

However, most pundits expect this spike to run its course within weeks, to be followed by a trough in demand, caused by the sharp slowdown of economic activity. Auto manufacturers are shutting down production both in the US and Mexico, as demand has imploded and is not likely to rebound quickly.

Moreover, employee lay-offs are also going to dampen consumption: the US Department of Labor reported a 30% rise in unemployment claims last week.

Rail carriers are already seeing an impact. US rail traffic in the week ended 21 March was down 8.6%, according to the Association of American Railroads. For the past week, total rail traffic was 459,996 carloads and intermodal units, 8.6% down on the same week in 2019.

John Gray, senior vice-president of the AAR, said it wouldn’t be surprising to see rail volumes soften more in the weeks ahead as steps taken to limit the spread of Covid-19 continue to impact producers.

On the other hand, the situation is opening up possibilities for some.

“We are experiencing opportunities from charters from Asia and Europe landing in the US, then using our in-bond road feeder service to Mexican airports,” Mr Gamel reported.

The concept also works with northbound trucking. One forwarder moves freight from Asia to Mexico and uses Mexpress to carry it to the US, he added.