The combination of congestion at US west coast ports and low interest rates is allowing US importers to use containerships as ‘offshore warehouses’, mitigating logistics costs.

According to freight visibility company project44, transit times from China to Los Angeles have nearly tripled, with freight taking up to 60 days to be cleared through LA and Long Beach ports – its data suggests an average of 540,255 teu per month was waiting to berth at LA.

Figures from p44 and HSBC estimate the average value of a container load at $40,000, with an average cost of financing of 3.2%, generating an extra $321m in interest between January and November 2021, says p44, adding this is “a small fraction of the total cost of goods”.

It said: “With interest rates at historic lows, companies could finance a surplus amount of inventory and essentially store it at sea for two months. While this might not be entirely deliberate, the congestion helped companies circumvent storage costs on the excess inventories.

“Though shippers paid interest-related penalties on freight stranded at sea, the costs were diminutive compared with storing that inventory on land (warehousing prices are high, while availability is scarce).”

While overall costs have increased, the pre-pandemic transit times from Chinese ports to Los Angeles was 16 days, with another six for clearance, said p44, using data from Shifl and the port of LA.

Meanwhile, project44 announced yesterday, it had received investment of $420m from a syndicate led by US private equity specialist Thoma Bravo. This followedthe $202m in equity p44 raised in last May and brings the company’s total valuation to $2.2bn

Robert Sayle, partner at Thoma Bravo, said: “Supply chain visibility has become increasingly important as shortages, delays and bottlenecks ramp up. project44’s potential to solve even the most complex of these issues is unparalleled.” 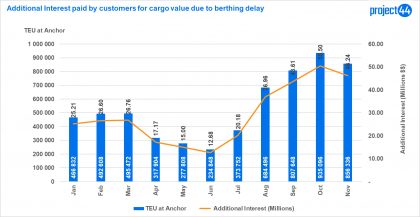 Port Klang has slammed claims it is suffering “endemic congestion”, caused by nearly two-thirds of ...

As shipping’s port congestion crisis widens, tech-players are hoping to capitalise on calls for improved ...