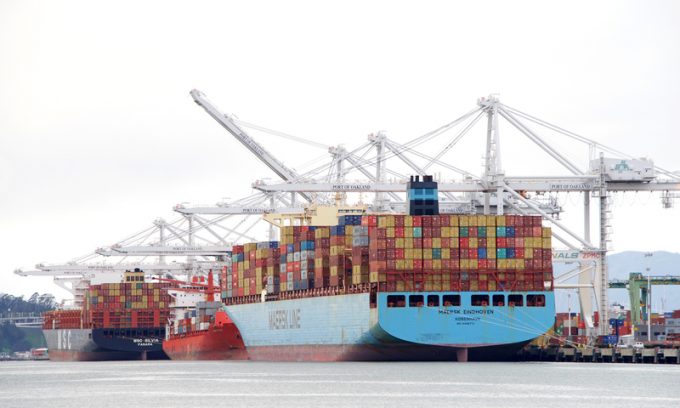 This latest box spill in the north Pacific will add urgency to a review of lashing practices on ULCVs, and could lead to an interim restriction on the height of container stacks on the route.

Maersk confirmed that the ship’s crew were all safe and that propulsion had been restored, as the FleetMon ships database recorded that the vessel had turned back at 3am local time today and was sailing at approximately 17 knots.

The carrier said it was awaiting further reports on the loss of containers, and added: “We are currently assessing nearest suitable port options in Asia to berth the vessel, and will keep you informed of the port location decision and timing.”

FleetMon reported yesterday there were “many containers adrift in North Pacific east of Kuril Islands”, which it understood had been lost from the Maersk Eindhoven.

The 2010-built vessel is deployed on Maersk’s TP6 loop and MSC’s Pearl service from Asia to the US west coast, and is the sixth casualty report involving container losses in the transpacific in the last 80 days. More than 2,750 boxes had been spilled before this latest incident – double the yearly average.

A World Shipping Council report in November said the annual average loss of containers overboard from the circa-5,000 container vessels in operation around the world was surprisingly low, at 1,382.

The unprecedented run of container losses on the route began on 30 November with the ONE Apus, which lost around 1,800 boxes in heavy weather, damaging many others in the process.

Most recently, on 16 January, the 13,092 teu Maersk Essen, a sister ship of the Maersk Eindhoven and deployed on the same loop, shed around 750 containers during heavy seas en route to Los Angeles. Due to the severe port congestion at Los Angeles, Maersk diverted the ship to Lazaro Cardenas, Mexico.

Following a survey, the discharge of damaged containers and minor vessel repairs, the vessel is expected to sail on 20 February to an anchorage at LA, where it has an estimated berthing date of 4 March.

In the aftermath of the Maersk Essen casualty, the carrier said it would be “taking any necessary steps to minimise the risk of similar incidents in the future”.

Casualty marine claims consultancy WK Webster warned shippers with cargo on board the Maersk Eindhoven that after the ship arrives at the ‘port of refuge’ it would face a “prolonged operation to remove collapsed and/or damaged containers from the affected deck area”.

It said it was “unclear at this stage whether the incident will give rise to General Average”. However, given that the parties concerned on the previous recent casualties have so far not declared GA, it seems unlikely.

Nevertheless, highlighting the uncertainty for shippers from the apparent new strategy for carriers to avoid declaring GA, WK Webster said it continued to press the owner of the ONE Apus, and the carrier ONE, to formally confirm that GA would not be applied, “so that this issue can be finally put to rest and our clients concerns allayed”.

In its most recent status report on the ONE Apus casualty, on 3 February, WK Webster said 638 containers had been discharged from the vessel, but that ONE’s plans for on carriage remained “somewhat opaque”.

“Details of the status of each container still does not include details of those containers thought to be lost overboard as a result of the incident,” said the consultancy.