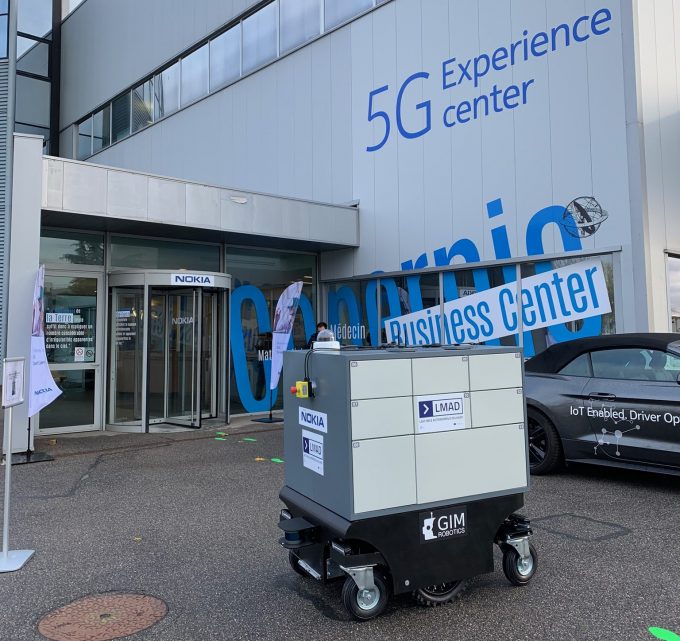 A new autonomous delivery robot (ADR) was this week unveiled in the Paris research and development (R&D) facility of tech firm Nokia.

It could pave the way for the widespread deployment of robots in last-mile supply chains.

The unit (pictured above) was deployed at Nokia’s Paris-Saclay campus, home to some 4,000 staff, and was developed by Last Mile Autonomous Delivery (LMAD), an EIT Digital-supported project, which is creating a software platform to pilot multiple types of robots for deliveries.

LMAD lead Jean-Philippe Bellaiche said: “Campus facility manager Sodexo, together with Nokia, have decided not to deliver parcels below 5kg to the personnel on the campus any more. This means any person working in this huge campus has to go to the central warehouse to get a parcel they ordered, which is not very convenient. ADRs could give great help in improving the service.

“We will operate an extensive pilot on the campus during the first quarter of next year. Our goal is to operate the delivery of all small parcels across the campus but, to achieve this, we will have to overcome some serious roadblocks about technology, authorisations and customer acceptance,” he added.

The LMAD consortium, which also includes Bestmile, GIM Robotics, BookIT, PICOM, Forum Virium Helsinki and Futurice, said it would conduct similar pilots at other sites over the next two years in closed conditions “in which the ADRs can move smoothly, without meeting too many constraints; later, they will be extended to more challenging environments, such as city centres”.

According to a recent report by McKinsey, autonomous robots with parcel lockers and drones could be carrying out up to 80% of last-mile deliveries by 2030. It  claimed calculations show ADRs could achieve a 40% cost saving over manual last-mile deliveries, particularly in rural and low population areas.

“Drones will be used mostly in rural areas, to cover long distances, whereas small robots running on pavements or bicycle lanes are bound to become the best autonomous solutions for urban environments,” EIT said, although Mr Bellaiche added that the last-mile delivery transformation would take some time.

“It’s a long-run market, due to technical constraints and the shift from manual driving to autonomous driving,” he said.