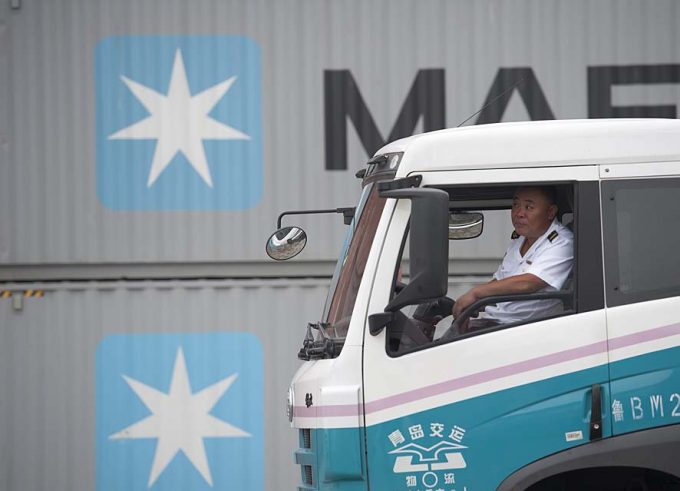 Maersk Line remained in the red in the first quarter of the year, recording a net loss of $66m.

However its executives are confident that the carrier is on track to turn a full-year profit in excess of $600m.

Group chief executive Soren Skou attributed the first-quarter loss to an 80% hike in fuel costs over the same period of 2016, which had not been totally compensated by a 10% revenue improvement to $5.5bn.

The average cost of  a tonne of bunker fuel purchased by Maersk Line in Q1 was $320, versus the average $178 last year.

The volume lifted by the carrier’s vessels increased by 10% to 5.2m teu. Interestingly, the backhaul routes chalked up an impressive 16.1% growth, while headhaul lanes were up by 7.4%.

Group chief financial officer Jakob Stausholm explained that many of the new increased contract rates would not “kick in” until the second quarter, He advised that, on average, the increase in Asia-Europe rates was around $450 per 40ft, while on the transpacific increases averaging $300 per 40ft had been achieved.

“The good news,” said Mr Stausholm, “is that we are seeing a recovery in the north-south environment, which, apart from reefer traffic, is almost entirely spot cargo.”

However, the higher freight rates enjoyed by Maersk Line had the opposite impact on the fortunes of its transport and logistics sibling Damco.

After a period of painful restructuring the forwarder had moved back into profitability in 2015 and 2016, but slid back to an $8m loss in the first three months of this year.

Mr Skou said Damco faced “very challenging market conditions”, and that some of the forwarder’s business had “come under water” as it had committed to prices with shippers, but was then faced with paying higher air and ocean freight rates.

Meanwhile, another sibling, APM Terminals, had been challenged in Q1 by a combination of declining markets in West Africa and stevedoring rate pressure at a number of its facilities worldwide, reporting a net profit of $96m for the period, compared with $114m in 2016.

It was reported that the terminal operator had lost services at several locations in the transition to the new and larger alliance networks. And rate pressure from “bigger alliance clout” had resulted in a 5.5% decline in revenue per move, to $189.

Nevertheless, APMT’s volume grew to 9.4m teu, compared with 8.7m teu in the same period a year ago, and on a like-for-like basis, there had been an encouraging 2.7% rise in throughput, mainly driven by its north-east Asian terminals.

But the star performer was the group’s container manufacturer, Maersk Container Industry (MCI), which saw revenue soar 117% year-on-year to $243m, resulting in a net profit for the quarter of $14m.

Mr Skou described the turnaround at MCI as “remarkable”.

At group level, turnover increased by 5% to $8.9bn, to give an underlying profit of $201m for the quarter.

But Big Fred is nowhere to be seen