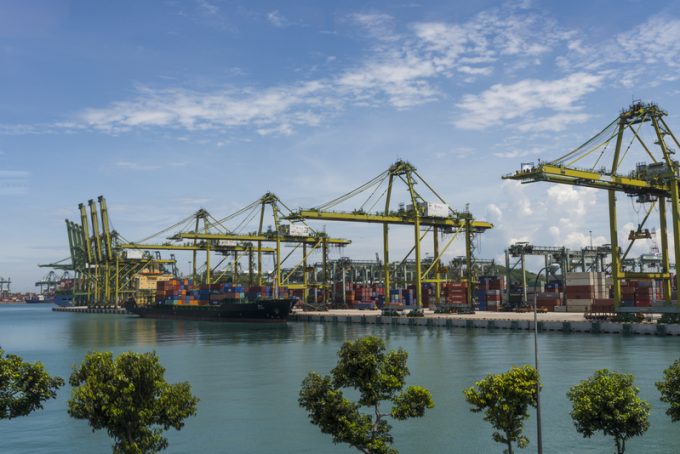 The result confirms Singapore’s place as the world’s second largest container port, after Shanghai, which was reported to have broken the 40m teu barrier last year.

As The Loadstar recently reported, at Port Klang, main terminal operator Westports saw 2017 throughput decline by 9%, largely as a result of the introduction of new shipping strings following the alliance shake-up in April.

Generally speaking, Port Klang was hit hard by the revamp as well as by mergers and acquisitions in the liner sector. In particular, the takeover of Singapore’s APL by CMA CGM of France appears to have hit hard, as the revised carrier setup favours Singapore over Port Klang as a South-east Asian transhipment hub.

“CMA CGM, now comprising APL, is now more invested with a dedicated terminal (CPLT), a joint-venture with PSA. Like APL before its sale to France, PSA is a subsidiary of Temasek Holdings, a Singaporean sovereign wealth fund,” Alphaliner wrote in a recent commentary.

CAM CGM’s Ocean Alliance partner, Cosco, also has a dedicated joint-venture Singapore terminal with PSA, as does 2M operator MSC; while its partner, Maersk, has a substantial shareholding in the port of Tanjung Pelepas.

In combination, these facts explain why there has been speculation that THE Alliance – its five members have no equity stakes in South-east Asia hubs – might be considering a move to Klang, especially since its recently published liner service simply lists “a South-east Asia hub”, rather than naming specific ports, as it did elsewhere in the schedules.

However, Singapore has also been working to employ other ways of keeping shipping lines intereste – after all, the transhipment business can be notoriously fickle.

This week’s news that Kuehne + Nagel and PSA-owner Temasek have jointly created an investment fund to plough cash into start-ups (“which are developing technologies and services with the potential to transform traditional business models in logistics, improve efficiency and provide an enhanced value proposition for the consumers”) is instructive. As was the news the following day that PSA itself had already signalled it would participate in the Maersk-IBM blockchain joint venture to “enrich port collaboration and improve terminal planning”.

Tan Chong Meng, group CEO of PSA, said: “The word ‘disruption’ has moved from being a buzzword to being the norm for most industries, reflecting the accelerated pace of change and leaving no industry untouched.

“As a group, PSA has demonstrated resilience and performed reasonably well against the challenging backdrop and tough competition. Amid the many business and technological forces and IT security threats buffeting us, we remain unwaveringly committed to our core focus of adapting to and pre-empting the changing needs of our shipping line customers.

“In addition, we are also preparing for a future where logistics and supply chain needs are transformed by new technology, trade, manufacturing and e-commerce dynamics.”