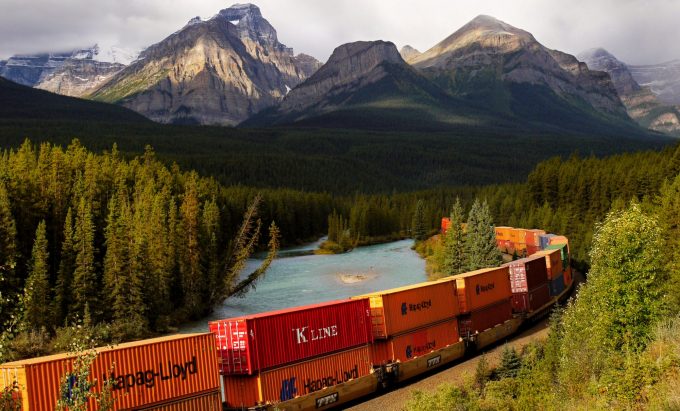 North American railroads broke free of the pandemic rut to record surging growth in intermodal revenue and volumes during the second quarter.

James Foote, CEO of CSX, which reported a 28% year-on-year spike in volumes for the three months to June, thanked the railroad’s employees for playing their part in the company’s rebound.

Full-year figures will also boosted by the second-quarter performance, with six-month revenue up 25%, to $979m, and volumes hitting 14m carloads, up 19% on H1 20.

“Both domestic and international volumes increased significantly, and continued to benefit from strong demand for transport services as well as the growth we are seeing from east coast ports,” Mr Foote told investors, adding: “Intermodal revenue and volume increases for Q2 set a new record for average daily volumes too.

“Through the use of our reservation system and the hard work of our intermodal team, we were able to keep all our intermodal terminals open over the past 12 months as volumes began to surge.”

It was also noted that the railroad had also managed to cut 12% per container from costs.

Rival Union Pacific’s CEO, Lance Fritz, also reported a “record-breaking” quarter, with volumes of more than 1.5m carloads, up 31% year on year, propelling revenue up by more than 50%, to $1.6m, on the back of a 14% climb in revenue per unit.

“Importantly, these strong results were achieved in a challenging environment as our rail network continues to be impacted by supply chain disruptions, particularly in the intermodal space,” said Mr Fritz.

Across the border in Canada, Canadian Pacific (CP), a suitor for Kansas City Southern (KCS), reported its “third record domestic intermodal quarter”, with volumes up 9% year on year and revenue climbing 23% to C$445m (US$355.5m).

CEO Keith Creel told investors the strong performance had been helped by deep ties to retail franchises, adding: “I’m extremely pleased with our intermodal growth into Atlantic Canada through our acquisition of CMQ and, since the start of this service, we’ve moved over 10,000 containers in this market and we’re on a current run rate that exceeds 20,000.

“On international, we had record revenue while managing significant challenges, like the well-documented industry-wide port congestion, vessel delays and container imbalances.”

As with some of the other railroads, CP’s six-month numbers were not quite as encouraging, but again not to be sniffed at, with volumes of 538,000 carloads equating to 3% growth and revenue up 9%, to C$768m.

The other half in the fight for KCS, Canadian National, reported a 13% uptick in Q2 volumes, which reached 691,000 carloads as revenue rose beyond C$1m, up 19%. It also reported 18% in volumes, at 1.4m carloads, generating some C$2m in revenue, up 16%, for the six months to June. But, unlike its competitors, it saw a slight dip, of 1%, in revenue per unit for the year to date.

CEO JJ Reust said the “strong operating and financial performance in the second quarter” was driven by the “long-term investments we are making in our network, equipment, technology and talent”.