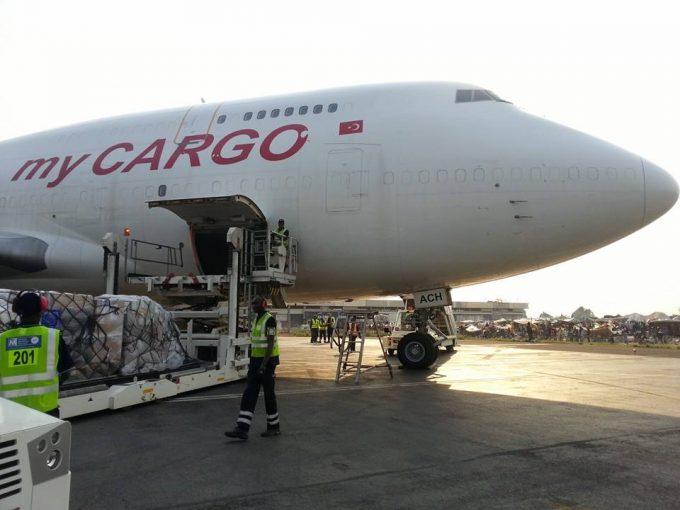 A MyCargo Airlines 747-400 freighter operated on behalf Turkish Airlines has crashed, killing at least 32 people after striking dozens of houses during an attempted landing at Manas Airport in Bishkek.

Flight TK-6491 from Hong Kong to Istanbul was on its final approach to the Kyrgyzstan capital as part of a planned fuel stop when, according to The Aviation Herald, the aircraft struck a runway fence and subsequently fell onto a housing estate, destroying 30 of 43 houses.

All four crew on board the 747 perished, along with at least 28 people on the ground, including children. A further eight received injuries and were rushed to hospital.

A statement from MyCargo, formerly ACT Airlines, said that the firm was deeply saddened to report that an accident happened during the flight to Bishkek by the TC-MCL-registered freighter.

“The cause of the accident is unknown at this time and further details will be provided as they become available,” added the carrier.

Kyrgyzstan’s prime minister was quoted in The Aviation Herald, stating that the Interstate Aviation Committee (IAC, also known as MAK) would be investigating.

The aircraft had been cleared for landing by air traffic control. Eleven other aircraft had landed without incident that morning, but a report by the UK’s BBC suggested the plane had attempted to land in fog.

Boeing and Turkish Airlines have both offered condolences to the families of those killed in the crash, with Boeing adding that a technical team stands ready to help at the request, and under the direction, of the government investigation authorities.

How the B747F remains the workhorse for air cargo

The demise of the 747 freighter remains some way off, as this interesting data shows. ...

KLM has backtracked on its decision to ground its combi aircraft by using them to ...

Please : a request for a reconsideration of KLM and Air France decision and announcement of ...