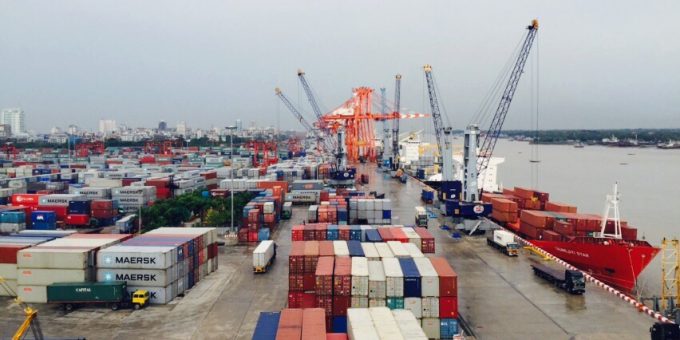 Myanmar’s largest container port is in the process of bringing on a global terminal operator as majority shareholder.

One of four inner-city terminals on Yangon River, Myanmar Industrial Port (MIP) handles 400,000 teu a year – about 40% of the country’s container throughput.

According to chief financial officer Chris O’Connor, MIP is reviewing bids from several large terminal operators, with the goal of securing a strategic partner to help speed up box handling at the congested facility.

“We’re working with Drewry who are helping us filter the bids over the next few months,” he told The Loadstar.

The search for a global operator is part of a wider strategy to modernise after two years of dramatic volume growth – traffic leapt by 32% in 2015 and a further 40% last year. Mr O’Connor put this down to a countrywide uptick in throughput, as well as the port’s expansion from 17 to 100 acres which helped it gain calls from neighbouring terminals.

“Now we have a two-pronged strategy: first, we’re implementing a Navis terminal operating system and a more complete enterprise resource planning (ERP) system, using technology to provide and present greater efficiencies of terminal handling by moving from a paper-based system. If we can move the boxes quicker that frees space in the stacks,” he explained.

The second approach will also create additional capacity. MIP plans to add 60 metres to the 750-metre quay, enabling five small feeder ships to dock simultaneously. It also has 30 acres of land adjacent to the facility ready to be developed with a new 200-400 metre quay.

While Myanmar has experienced strong, 7-8%, economic growth following the lifting of sanctions in 2012, its container supply chains remain limited to feeder calls. Vessels of around 1,000 teu ply mostly between Bangladesh, Singapore, Malaysia, Thailand and, increasingly, China.

The nine-metre draught of the Yangon river prevents larger vessels reaching the inner-city terminals. Downriver, the port at Thilawa Special Economic Zone is slightly deeper, but a lack of connectivity means it is under-used.

Mr O’Connor said: “The challenge is that between Yangon and Thilawa, you’ve got a two-lane highway and a bridge, which basically needs massive refurbishment or replacing. If you’re a shipping line, generally people want their box in the city because you’re closer to the industrial hubs.”

MIP has a 200-acre greenfield facility at Thilawa ready to build on when the time is right, he added.

Meanwhile, the congestion experienced last year – when an influx of China-bound sugar shipments played havoc with port operations – has not returned. Mr O’Connor said the sugar spike was a one-off and that, while still expanding, the dramatic growth experienced at the country’s ports appears to have “taken a breather”.

The implementation of the Myanmar Automated Cargo Clearance System has also helped to reduce waiting times for processing cargo. And although dwell times at MIP remain relatively high, at over 10 days, Mr O’Connor said this could be reduced by 30-40% through technology.

“In emerging markets, a lot of the time people like to buy and build things, but what we need is better utilisation of our assets – land, equipment, IT – rather than being a larger port and having the same level of inefficiencies,” he added.