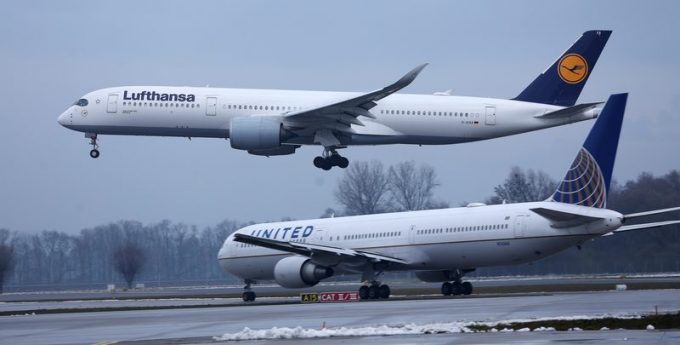 The pandemic has decimated passenger airline networks, eliminating lots of flights to second-tier gateways, Lufthansa and United have been no exception to this effect.

But their transatlantic cargo joint-venture, which started three years ago, has softened the blow, they claim.

Both of the carriers’ transatlantic routes and frequencies are down. United’s schedule was reduced by 80%, which included the suspension of its flights to Germany last year.

Munich, Germany’s second-largest gateway, lost most of its international connections and could no longer serve as a transit point.

Despite these headwinds, Lufthansa and United had moved more than 400,000 shipments by early May, reported Jan Krems, president cargo at United.

Some of these were carried on all-cargo flights using passenger widebodies that United embraced with alacrity.

Mr Krems said: “While overall marketplace capacity was quite limited, United filled the majority of the available cargo-only flight capacity itself, with consideration given to JV partners, as needed.”

And, with multiple gateways and routings still in place, the loss of Munich as a transit point did not seriously impact flows.

“We could use other points,” said Bernhard Kindelbacher, vice-president US & Canada at Lufthansa Cargo. “Together we have the best network.”

Mr Krems agreed: “Our combined network, albeit modified at the moment, is a positive for us. We believe that to be a competitive advantage.”

It helps that the JV allows both to sell their joint capacity, regardless of the livery of the aircraft. Lufthansa’s freighters are not in the mix, though.

In some cases, United’s domestic network helps funnel traffic to transatlantic gateways, such as a widebody service between San Francisco and Newark, which has supplemented Lufthansa’s direct capacity out of the west coast city, he said.

Although not served by United with international widebody flights, Atlanta has been another key gateway for the joint-venture, thanks to the German partner’s strong presence there.

Transfers have not been affected by the repercussions from the pandemic, Mr Kindelbacher said. And the volatility that has characterised passenger operations has not seriously impacted cargo activities either, according to Mr Krems.

“Schedule volatility has introduced a number of challenges, as many pandemic factors were truly unpredictable,” he said, pointing to border restrictions and quarantine regulations.

“Fortunately volatile schedules did not create selling issues. Flight schedule updates are part of our standard process. They are automatically transmitted between the JV partners,” he continued.

Owing to antitrust issues, the JV is limited to the US and the European Union, so the pair cannot share beyond that traffic. Nevertheless, they see promising opportunities to expand the collaboration.

“Customers want solutions that are nimble and quick to market. As global commerce and supply chains recover from the pandemic, our focus is really on efficiency… enabling our current co-ordination to work better,” Mr Krems explained.

Mr Kindelbacher agreed that exchange of data between the pair could be accelerated.

“There are certainly areas where we can improve,” he said. He also anticipates increased communication between the two sales forces to provide joint solutions to customers.

In March, Lufthansa Cargo CEO Dorothea von Boxberg said that, while there were no plans to expand the joint-venture regionally, the focus would be on deepening the partnership. One possible avenue would be to broaden the scope from general cargo to special products, she hinted.