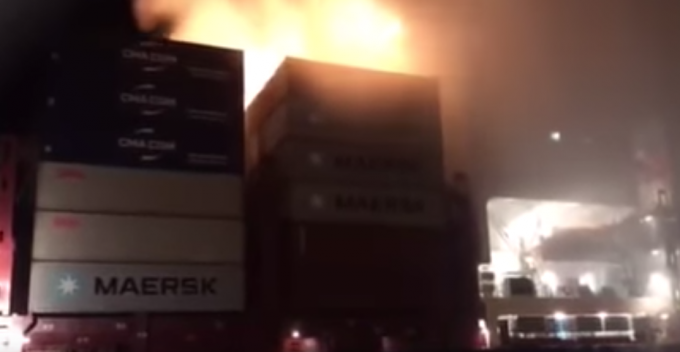 Yet another container vessel has caught fire – the latest casualty is the 9,200 teu APL Vancouver, off the Vietnamese coast en route from China to Singapore.

The blaze started in the early hours of 31 January and with no injuries to the crew reported, The Loadstar understands the vessel has been partially evacuated.

APL, a subsidiary of the CMA CGM group, has advised that response procedures were in place “to coordinate all necessary actions to ensure the fire is safely and promptly extinguished”.

However, according to latest reports, the blaze, which appears to have started in a container stowed in the hold forward of the accommodation block, has still not been successfully contained, despite the attendance of firefighting tugs deployed by the Vietnamese authorities.

Case histories of the long list of containership fires, including the 7,500 teu Yantian Express, which caught fire off the Canadian coast just last month, suggest it could take salvage teams weeks to subdue the hotspots of fire in the holds and to completely extinguish the blaze.

In the process, the contents of the APL Vancouver’s containers will be subjected to damage caused by smoke, heat and firefighting water. Moreover, some of the reefer containers in the vicinity of the blaze will most likely have lost power.

Unconfirmed reports advise that the ship had around 4,500 containers on board at the time of the fire, including more than 100 loaded with hazardous materials.

One marine insurance contact The Loadstar spoke to today said he thought that general average (GA) was likely to be declared on the APL Vancouver, given the potential size of the salvage claim.

“As was the case of the Yantian Express last week and the Maersk Honam last year, the liners are much more likely these days to declare GA than to take a ‘commercial view’ on the salvage costs,” he said.

GA is a principle of maritime law where damages and salvage costs are shared among the cargo in proportion to its value.

However, it is estimated that more than half the number containers shipped do not have adequate insurance to cover GA liability, and therefore shippers of salvaged cargo could potentially have their goods auctioned to pay GA expenses.

With fires on containerships becoming more common and vessels getting bigger, thus increasing the potential scale of the casualty, industry experts are calling on ocean carriers to follow the lead of Maersk Line in adopting a random physical inspection of boxes.

The Danish carrier said last month it had implemented a container inspection pilot in North America as a deterrent to ‘rogue’ shipments. Maersk explained that the aim of the inspections was to collect data to “better ensure the accuracy of cargo descriptions”, as well as to improve the use of the IMO’s Code of Practice of Cargo Units, which is a non-mandatory guide for the loading of cargo in containers.

Maersk’s initiative was lauded by global shipping insurer the TT Club, which has recently launched its #Fit4Freight campaign in conjunction with the Global Shippers Forum, the World Shipping Council and cargo handling association the ICHCA.

Poorly packed containers and shipper misunderstanding of the dangers of some non-hazardous cargo could result ...

Companies in the cold chain logistics sector are facing mounting pressure to invest in automation ...

Ocean carriers are looking to extend transit times in a bid to improve schedule reliability ...

Box shortage in India may be easing a little, but trade imbalance widens

The container shortage in India is improving, according to Maersk. However, the carrier’s Q3 trade report ...

Canadian Pacific Rail’s (CP) drive to establish itself as an operator serving container streams on ...