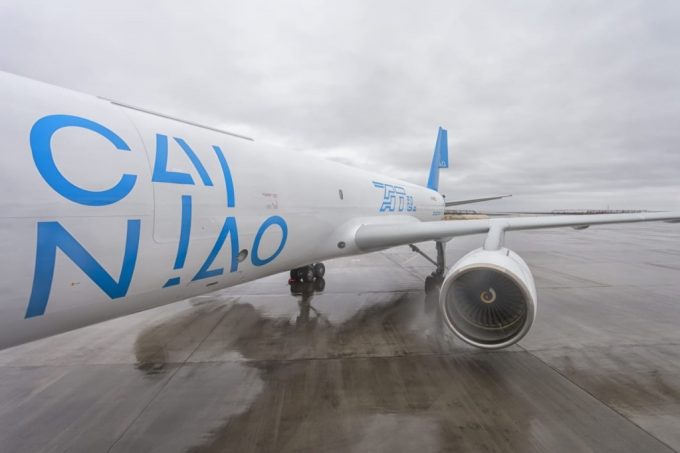 An Aviastar-TU Tupolev Tu-204C caught fire at Hangzhou-Xiaoshan Airport in the early hours of Saturday – all eight crew members survived, but the aircraft did not.

The Cainiao-liveried aircraft was operated on behalf of Alibaba’s logistics arm, with which Aviastar first signed a deal in 2018 for flights out of Hangzhou.

The aircraft was due to fly to Novosibirsk with 20 tonnes of general cargo. According to Aviation Herald, the aircraft was being pushed back for departure when the fire began.

Just two minutes after the emergency services had been called, the fire had “broken through the crown of the aircraft”.

Aviastar Tupolev Tu-204F (RA-64032, built 2002) was destroyed when a fire broke out inside the cabin during pushback for departure at Hangzhou Airport (ZSHC), China. The crew evacuated safely. Flight #4B6534 to Novosibirsk burnt to destructon.https://t.co/6mlGcrTXg2 pic.twitter.com/p3dohcXZue

However, so far there has been no official declaration as to the cause, which is still under investigation.

A spokesperson for Cainaio, which also uses Aviastar 757Fs, told The Loadstar: “The incident occurred in the early morning of 8 January. A Russian airline’s cargo flight caught fire, but it was extinguished promptly without any casualties. The incident is under investigation and the airline will be issuing an official statement once it is concluded.”

Rules on carrying lithium batteries were updated by IATA on 2 January this year. Badly packaged batteries have been the cause of some fires but, more worryingly for airlines, many shipments of batteries are misdeclared or counterfeit, reducing carriers’ ability to check for dangerous goods.

The fire will again put the focus on the carriage of the goods – an issue highlighted by Qatar Airways cargo chief Guillaume Halleux last year, as he urged regulators to take action. He said: “We have no visibility over the cargo given to us. We screen for explosives and bombs, but we don’t look for lithium.

“The technology exists to do so, but it isn’t used. You can ban shippers all you like, but there is no point if you are not checking the cargo.

“The regulators say to me, ‘well, go on then, check the cargo’. But that would mean the cut-off time for flights would go from six hours to 12, and ground handling costs would double. So I’d be taking myself out of the market. Other airlines may start to do the same, but there will always be a cowboy who doesn’t.

“I am very concerned it will take a crash – and the loss of 300 people – for this to change. And then the regulators will say ‘you knew, and you did nothing’.”

Aviastar has been asked for comment, but had not responded before publication. The carrier also flies on behalf of DHL and operates six 757 freighters and had three Tu204s. It is owned by Russia’s United Aircraft Corporation.