The European road freight industry was thrown into near-chaos by the social lockdowns, but first-quarter road freight rates held up and new data suggests volumes have already begun to recover.

According to the latest road freight rate benchmark, published today by Transport Intelligence (Ti) and Upply, the average European road freight rate in the first quarter was €1,099, a quarter-on-quarter drop of 0.8% and just 0.2% year on year.

Although the effects of the pandemic only really began to appear in the European road freight sector in March, Ti said a dramatic decline in volumes in some sectors had been mitigated by hauliers significantly cutting capacity, which had held up rate levels.

“Production in the automotive sector largely came to a standstill in mid-March, eradicating significant road freight volumes related to the sector,” the report says.

“There were violent jumps in demand for grocery-related transport as a result of panic-buying, although in France, Spain and Italy in particular, it appears demand subsided here later too.

“Chemical and pharmaceutical production have seen sustained higher demand levels throughout the crisis, but the fashion-retail and industrial sectors have suffered.”

“The drastic drop in capacity around the continent helped freight rates remain relatively strong, despite the downturn in output.”

However, the report warns that “a greater degree of volatility can be found beneath the surface”, due to the huge variations between verticals such as automotive on the one hand and food and medicines on the other.

“As a result of lockdowns, demand for road freight has clearly fallen, although in some places, such as pharmaceuticals and groceries, there have been some significant spikes.

“The supply side has seen shocks as a result of capacity cuts, whilst diesel prices hit an 18-month low in March. This had led to increased volatility in road freight prices,” it says.

Meanwhile, new data from Shippeo, which monitors the operational status of over 3,000 factories and warehouses across Europe to produce a supply chain visibility index, suggests shipment levels in a range of verticals actually began to recover from mid-April.

Starting 9 March, when social lockdowns started to become widespread and economic activity was at 100%, the index charts the dramatic decline and, in some cases subsequent recovery, in activity across six key sectors: automotive; food, beverages and tobacco; metal, rubber, plastics and paper; machinery and equipment; construction and building materials; and non-food retail.

In every one of those sectors, apart from metal, rubber, plastics and paper, activity levels at the end of April were higher than they had been at the beginning of the month.

In the automotive sector, activity on 14 April was just 4% of that on 9 March. But by 27 April, it had risen to 11% as factories resumed some production.

Similarly, in the non-food retail sector, which has been clearly devastated by the lockdowns, activity on 6 April was just 9% of 9 March, but had recovered to 26% by 27 April. See the full chart below: 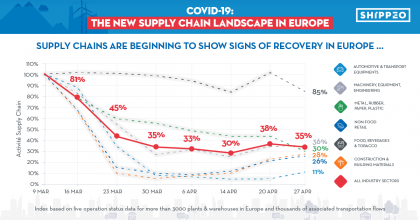