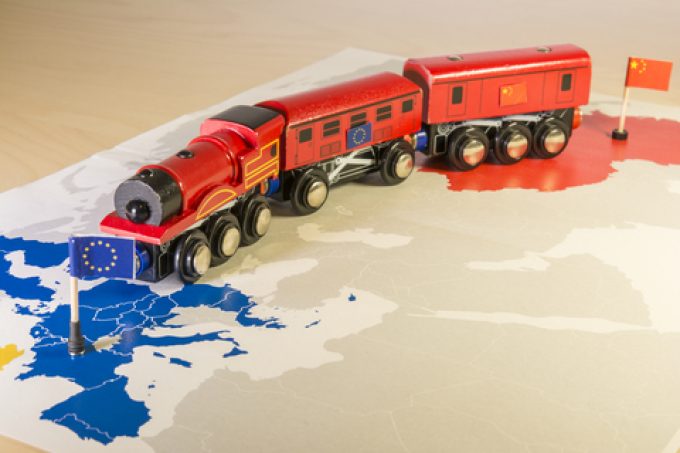 The port of Duisburg is teaming up with Cosco Shipping Logistics to build Europe’s largest inland container terminal, as it looks to tap into “booming” Silk Road rail volumes.

However, the move follows claims that Chinese subsidies were turning the burgeoning rail route into a “huge bubble,” due the large number of empty blocktrains leaving China.

According to port operator Duisport, the €100m ‘Duisburg Gateway Terminal’ will be built by 2022 on a 240,000sq metre site, with an intermodal facility that will include six gantry cranes, 12 blocktrain platforms, five loading areas, three berths for inland vessels and a 60,000sq metre container storage area.

“Even now, around 30% of all rail-based trade between China and Europe runs through the port of Duisburg,” it said.

This translates to 35-40 trains a week running between Duisport and a dozen destinations across China, it added, noting the new terminal would significantly increase this to 100 China-bound trains a week.

“Rail traffic on the European rail corridors, in particular to eastern and south-eastern Europe, and inland waterway services to seaports, will [also] be able to operate from the Duisburg Gateway Terminal, which will thereby generate an annual throughput of around 850,000 teu upon completion,” the company said.

Duisport and China’s Cosco Shipping Logistics each own 30% of the new venture, while Swiss intermodal operator Hupac and Dutch inland waterway company HTS both hold a 20% share.

“A key target in this plan is to reach 1m teu by rail by 2021, and 2m teu by 2025,” he told The Loadstar. “Furthermore, it also helps China in meeting its target to reduce rail subsidies by 2022 by building volume along the route, as well as the current crackdown on shipping empty containers. Currently, subsidies range from 30% to 40% of container costs.”

Controversy over shipping empty containers broke out in August when, in a rare development, a Chinese media outlet published a damning report on the impact of subsidies that range from $3,000-$5,000 per container. The report claimed local governments in China were incentivised to inflate the number of train services with empty containers, due to the lucrative financial support on offer from central government.

However, according to RailFreight.com, loaded trains from the top seven Chinese localities, which represent 73% of all China-Europe cargo trains, increased to over 94% for the first half of this year, after the Chinese government issued a new restriction that only fully loaded trains could be subsidised.