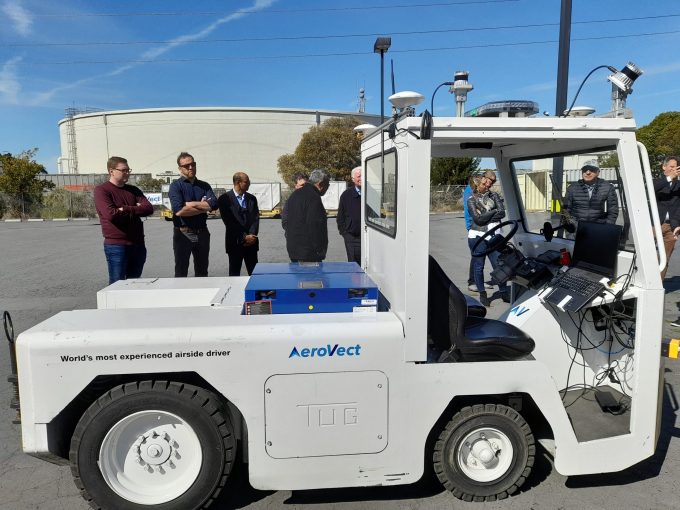 It has taken just two short years, but in that time start-up AeroVect has designed, built – and is now delivering – software which will enable airport vehicles to drive autonomously.

The San Francisco company has announced a major deal with global handler dnata for some 100 units, to be rolled out in the US, Dubai and Europe.

AeroVect is a ‘typical’ start-up story of two Harvard graduates designing the software in their garage during lockdown. It aims to revolutionise ground support with its technology, which first maps airports digitally, and then can be placed on any vehicle enabling them to self-drive, negating the need for training or labour.

With airports, airlines and handlers currently struggling to find sufficient staff, the technology has come at a good time.

“It’s very exciting,” co-founder Eugenio Donati told The Loadstar on the sidelines of the ACHL event in Athens last week. “Airports have been very supportive, and now we have a major global handler.

“Everyone has been struggling with labour issues so airports want it so long as it’s safe. And they won’t have to let go of people – they haven’t got them in the first place.

“Companies don’t have to buy new equipment, we are OEM-agnostic, so they can retrofit their existing fleets – they don’t want to spend the extra money.

“This summer was a wake-up call – and this tech just future-proofs their operation.”

Customers pay a subscription to use the software, the cost of which depends on the airport, operation and so on.

Dnata is not the only company to bite. US ground support company GAT announced a pilot project with AeroVect in March – and a legacy carrier is said to be considering a significant order, one that could dwarf dnata’s initial order.

Mr Donati has nothing but praise for his first customers, who have moved fast given AeroVect’s brief length of time in the market.

“When we first started, we wanted to have a lasting impact on aviation – but the speed with which it has happened is beyond our expectations and very pleasantly surprising. In two years we have gone from the garage at home, to airports.

“Airlines can be slow to move, but when they feel the pain, they go faster – and dnata has moved very quickly too. For a handler of that size to shift that quickly is very impressive. It is very forward-looking, with a bold and ambitious vision.”

Dnata will use the software on its vehicles to transport, autonomously, cargo from the warehouse to airport terminal.

“We look forward to piloting and deploying AeroVect’s innovative solution in our operations at some of the world’s busiest airports.”

AeroVect will not be resting on its laurels now. “We have a very long pipeline and probably more interest than we can deliver,” added Mr Donati.