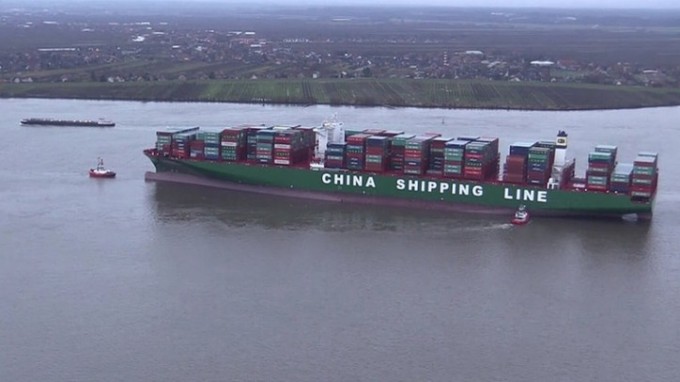 The 19,100 teu CSCL Indian Ocean was successfully re-floated on the river Elbe in the early hours of today after running aground nearly a week ago on its approach to the port of Hamburg.

According to a statement from the Elbe pilots’ association, the ultra-large container vessel suffered a technical defect in its steering gear on the evening of 3 February, off Luhesand – a small island around 30km from the port.

On the advice of Elbe pilots, the 400-metre ship was towed to the north edge of the fairway, which enabled the river to be kept open for shipping, but resulted in the CSCL Indian Ocean running aground.

Despite being lightened by the removal of over 2,500 tonnes of bunker fuel, even with up to 12 tugs in attendance, attempts to re-float it failed.

However, today’s high spring tide represented salvors’ best opportunity to free the ship. If this attempt had also failed then salvage company Smit was said to be considering a complex operation to discharge some containers to lighten the ship even more, involving the deployment of Rotterdam-based floating cranes.

The ship has now arrived at Eurogate Terminal, Hamburg, where it will discharge its German import cargo and have its hull inspected for damage.

Although the cost of the salvage operation will have been very high, so far there has been no news on any possible General Average declaration by owners.

The ship is deployed by China Shipping on a loop between Asia and North Europe as part of its O3 alliance vessel-sharing partnership with CMA CGM and UASC.

The grounding of the CSCL Indian Ocean has brought back into focus the much-delayed dredging of the Lower and Outer Elbe, which the port’s management insist is vital to its ability to handle the biggest containerships in the world – unrestricted by tidal windows.

The approval of the two-year project, involving the deepening of the Elbe’s navigation channel by one metre and the construction of a 385-metre passing channel, has been extensively delayed in the German courts.

Venting his frustration last year, the chief executive of the port’s marketing executive board, Ingo Egloff, said an urgent decision was needed from the courts.

“We have already waited far too long for the start of dredging,” he said.

The port will publish its 2015 container throughput figures tomorrow, which are likely to have been impacted by the decline in Russian transhipment cargo and the general slowdown in European demand. In this scenario Hamburg needs all the help it can get.

A spokesman for Port of Hamburg Marketing told The Loadstar this morning: “The river Elbe dredging project will hopefully go ahead after the federal court decision which we expect during this year. Responsible administration for this dredging project is the federal ministry for traffic in Berlin because the Elbe river is a national waterway.”