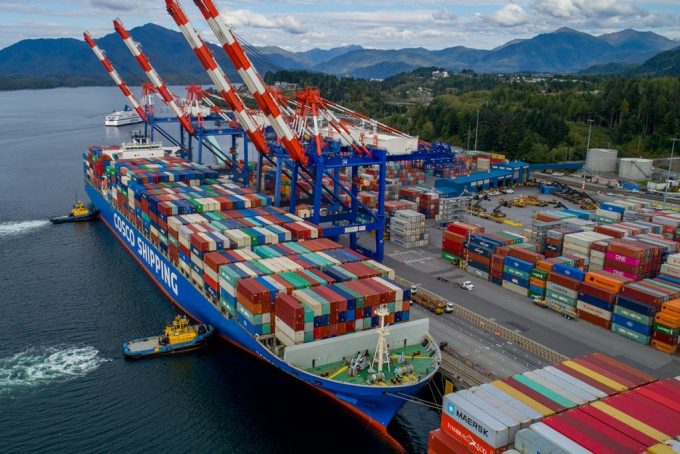 Cosco Shipping Lines is offering shippers an expedited intermodal service to get their goods from China to Chicago in the US.

Shippers are now given the option of shipping from Shanghai, Ningbo and Qingdao to Prince Rupert port in British Columbia, Canada, from where the containers can be railed to Chicago.

While the China-US west coast voyage itself takes only 14 days, ships are currently waiting around nine days to get a berth at Los Angeles and Long Beach ports. Add time needed for unloading and the bottlenecks in US rail transport, and it could take a month for goods to reach Chicago.

Cosco claims its intermodal solution can get them there in just 19 days.

At Prince Rupert, its ships will dock at DP World’s terminal, from where the goods will be transferred to the connected Canadian National Railway line.

Cosco will also offer the service to customers of its Ocean Alliance partners, CMA CGM and Evergreen, and plans to expand coverage to more inland points in the US and eastern Canada.

British Columbia, at the end of the shortest distance between North America and Asia, is known as Canada’s Pacific Gateway and, as far back as 2007, has promoted Prince Rupert port as an alternative way into Chicago, Detroit and Tennessee.

Statistics from Canada’s Ministry of Foreign Affairs show that logistics at Vancouver and Prince Rupert have accounted for nearly 10% of the entire Canadian west coast, of which the US re-exports make up about 9%.

Just over a year after entering the container liner shipping market, Singapore-based Pioneer Line is ...