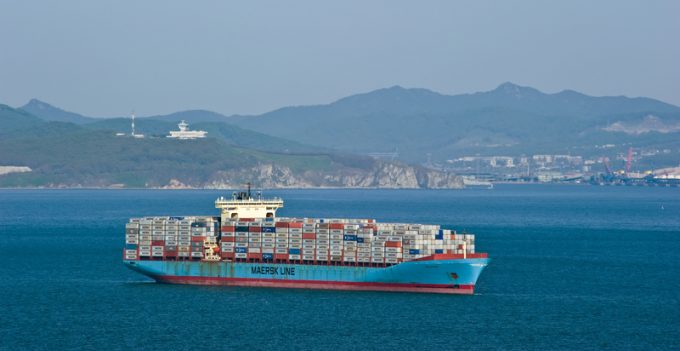 With the containership charter market in the doldrums, demolition sales have picked up, with reports of a number of vessel sales.

Among them is the 1998-built 9,600 teu Sine Maersk (pictured above), which has been sold to Turkish breakers and will become the largest containership ever sent for recycling.

According to vesselsvalue.com, the post-panamax ship has been at anchor off Aliaga, Turkey, since 29 June and is due to be handed over to buyers today for an undisclosed price.

However, Alphaliner notes that Maersk is likely to receive about $100/Ldt less scrapping the ship at a Turkish yard than the carrier could have obtained in the Indian sub-continent.

Maersk ballasted the ship from Oman to Turkey via the Suez Canal to honour its commitment to sustainable vessel recycling, in accordance with the Basel Convention and EU Ship Recycling Regulation.

The Sine Maersk was built at the group’s Odense shipyard in Denmark and was subsequently lengthened, including raising its deck house bridge, in 2011 to boost its container intake by 2,200 teu.

The consultant noted that two Costamare-owned sister ships, the 7,403 teu ex Katrine Maersk and Kirsten Maersk, had recently arrived in India for breaking.

A broker source told The Loadstar that, given the expected ongoing weak demand and the depressed charter market, a number of 10,000 teu ships would be candidates for scrapping.

“I think carriers will be looking to improve their balance sheets with some demo sales, and the non-operating owners will just want to get the best deal possible, wash their face and walk away,” he said.

According to London broker Braemar ACM, over the past 30 days there have been 18 container vessels, with a capacity of 58,500 teu, sold for demolition, while the total demolished so far this year has reached 38 vessels for 90,000 teu.

This is somewhat below the 74 ships, for 145,500 teu, scrapped during the same period of 2019, but the low number reflects the demo market being stymied for three months due to the pandemic.

However, with the recent acceleration in scrapping enquiries, the amount of container tonnage recycled this year is likely to exceed last year’s total of 100 ships for 195,500 teu.

But sellers will need to adjust their price expectations to conclude deals. For example, recent demolition sales by carriers Evergreen and Yang Ming have only achieved around $280/Ldt, more than 25% below the market level at the beginning of the year.