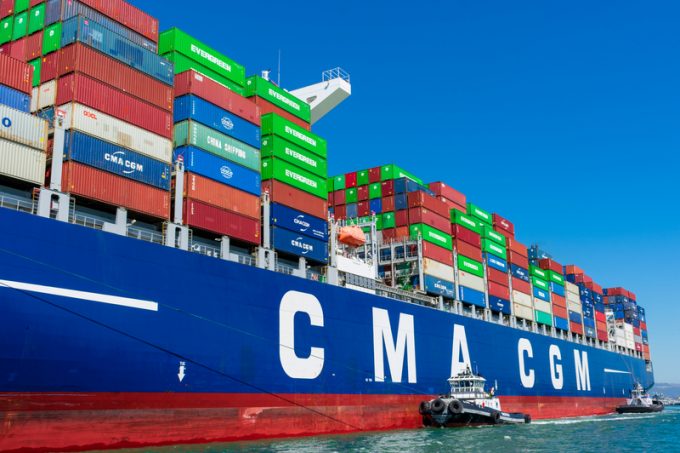 CMA CGM has joined its liner peers in posting a huge profit for the third quarter, $567m, as the industry basked in an unexpected “favourable market environment”.

However, the French transport and logistics group said its outlook “remained under threat” from the impact of the pandemic and the “capacity strategies” of its rivals.

Carryings on CMA CGM vessels were up just 1% on the year before, at 5.59m teu, with the improved financials driven by a 6.8% decline in unit costs, mainly fuel, combined with a 5.2% increase in its average rate to $1,120 per teu.

“In a favourable market environment for our industry, the group reported very strong financial and operating performances,” said chairman and CEO Rodolphe Saade.

He said the group’s logistics business, Ceva, had “started to bear fruit”, with a modest $1m net profit, marking its first quarterly surplus since the acquisition completed in Q2 19.

And CMA CGM said it expected to report even better results from its ocean carrier business in Q4, thanks to higher freight rates and “more sustained activity”.

“This momentum is particularly marked in the US and Latin America and allows the fleet to continue operating at full capacity. As a result, freight rates remain high,” it said.

For the nine-month period, CMA CGM’s net profit was $751m, compared with a loss of $107m the year before.

“The financial impact of Covid-19 during the first nine months of 2020 has been counterbalanced by the combination of supportive unit revenue dynamics in the ocean division, as well as lower bunker expense and voluntary cost reductions across the group,” explained CMA CGM.

It said the trends “currently continue to prevail”, but the full impact of the pandemic “remains difficult to predict”.

“Ultimate business impact will depend on the pace at which economies resume globally and on the various government measures to support that recovery, as well as strategies adopted by other liners regarding deployment of capacity.”

CMA CGM suffered a ransomware-based cyber-attack on 28 September which forced it to shut its e-commerce platforms. Although it was able to process bookings manually, as well as through the INTTRA platform, it said this “did not fully compensate for the bookings that are usually made”.

Nevertheless, CMA CGM said it was fortunate that the timing of the attack coincided with Chinese Golden Week holiday factory shutdowns, thus fewer bookings were lost.

It estimates the cost of the cyberattack at “below $50m”, which is significantly lower than the $300m cost of the attack on Maersk in 2017.