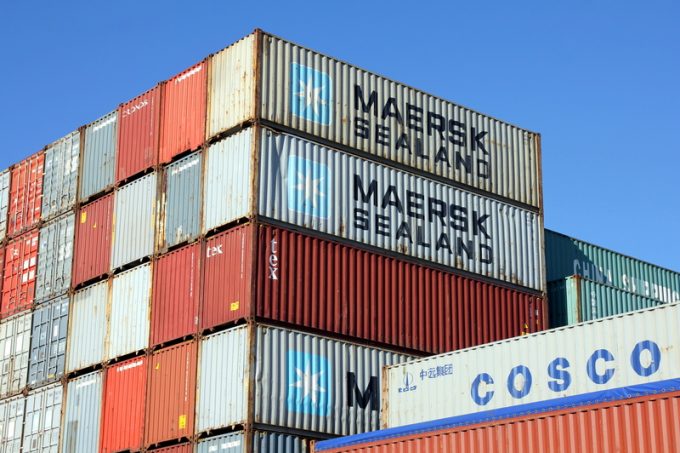 London Gateway has shut its gates to some empty container flows after receiving a deluge of boxes diverted from Felixstowe, which had similar problems earlier in the week.

However, today, Felixstowe is set to again accept empties for Maersk and Evergreen, although it was unclear if that also applies to CMA CGM.

“CMA now been shut out from Felixstowe, hauliers are having real problems knowing where there is space to return empties – I have one of my hauliers charging me £500 on top of my rate, so a lot of hauliers are trying to profiteer.

“I am hearing the ports are telling shipping lines, ‘you’re not berthing unless you commit to loading your empties back out’,” one freight forwarder told The Loadstar this week.

In response, Maersk has put an extra loader into Felixstowe to clear empties from the east coast port. The 4,500 teu geared Maersk Cape Coast docked at Felixstowe’s Trinity Terminal yesterday to take on Maersk empties stacked up at the port.

A photo taken this week on shipspotting.com shows the empty vessel at anchor off Felixstowe, and according to AIS data, it is scheduled to depart Felixstowe for Rotterdam next week.

A customer advisory from Maersk today said: “We have been working tirelessly to increase the empty uplift on vessels alongside, and to find additional berthing windows to bring in extra loaders. As a result, the gates will re-open to accept empty containers from 1600hrs on 08/10.”

It also said it had secured additional empty container storage space at the West Bank terminal, in nearby Ipswich, from haulage operator James Kemball.

However, Maersk explained that the gate closure earlier in the week at Felixstowe had now caused congestion problems at London Gateway.

“Due to the high volume of empty returns following the gate closures at Felixstowe, we have seen an extraordinary amount of empty returns into London Gateway. Already operating with a high yard density, yesterday the terminal authorities made the difficult decision to close their gates for empty returns,” it said, adding that it did not expect the gates to reopen until next week, although it had secured some additional storage space in nearby Tilbury.

A London Gateway customer advisory issued last night said: “With the current high volumes (laden and empties), we are closely monitoring our stack levels to ensure port operations are not compromised.

“Carriers have agreed empty pools and, with the current situation, we cannot allow carriers to exceed their empty pools to protect port operations and maintain service levels.”