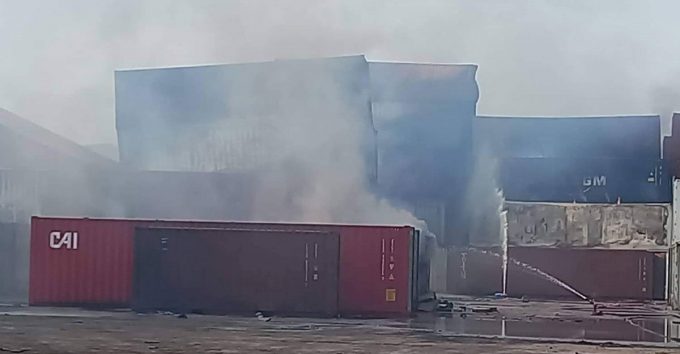 Devastation at the BM Container Depot in Chittagong, following a container fire which is still burning some 46 hours later, has been blamed on the presence of chemical containers that were supposed to be shipped soon.

On 6 June some containers were still burning fiercely and were pouring smoke into the atmosphere at the Sitakunda, Chittagong, inland facility, 40km north of the port, where the fire broke out on Saturday night. Several subsequent blasts reportedly killed at least 49 people, eight of them fire-fighters.

The Bangladesh Army, which is assisting fire-fighters, said on Monday afternoon that it has identified four more chemical-laden boxes close to the burning containers, and they are trying to remove them to a safe place to avoid further explosions.

These were brought in four years ago by a textile miller, which did not take delivery of the containers.

A senior CPA official said they will clear as many of the chemical-laden boxes as possible from port yards, and the customs authority has taken the necessary preparatory measures.

Bangladesh annually exports more than $20m worth of hydrogen peroxide to countries like India, Pakistan, and Vietnam.

Rakibul Alam Chowdhury, vice president, Bangladesh Garment Manufacturers and Exporters Association said they are working on an appropriate assessment of losses from the fire by collecting information from members.

“We are in close contact with the buyers’ forum and updating them from time to time on the info we receive about the losses incurred,” he told The Loadstar.

He added that the BM Container Depot, a Bangladesh-Netherlands joint venture, has suffered a devastating blow, and the fire is still not under control.

Mr Chowdhury said Sweden-based retailer H&M has already said that it will make full payment to the exporters for its goods which burnt at the depot. H&M had some 5m pieces of apparel goods in the depot.

Bangladeshi apparel makers have demanded that the National Board of Revenue (NBR) prevents the shift ...

Over-dependence on Maersk partly to blame for Chittagong export backlog

Bangladeshi apparel makers are partly blaming the over-reliance of buyers on Maersk Line for the ...

Bangladesh yesterday began its strictest ‘shutdown’ yet, as Covid infections and deaths continue to break ...