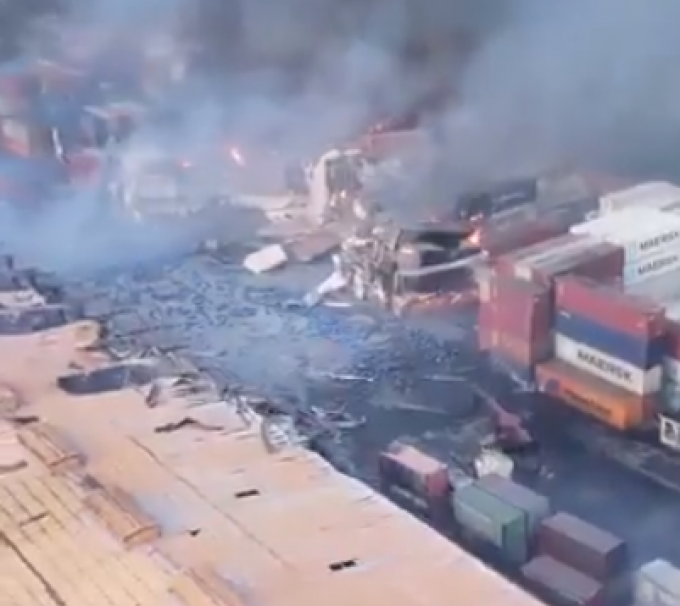 The death toll following Saturday night’s catastrophic fire and numerous blasts in a container depot near Chittagong port has now reached 42, and is expected to rise further.

The off dock depot, BM Container Depot Ltd, is a Netherlands-Bangladesh joint venture, located at Sitakunda, Chittagong. It had been housing 16 chemical-laden export containers, full of hydrogen peroxide, which may have caused the blasts after a fire erupted in a container at 9pm Saturday.

Firefighters are still at the scene where there continue to be small blasts, destroying scores of containers.

Hospital sources said the number of injured, with many suffering severe burns and in a critical condition, had reached more than two hundred and are being treated in hospitals throughout Chittagong. Fire fighters and depot officials are amongst the dead.

Ruhul Amin Sikder, secretary general, Bangladesh Inland Container Depot Association, told The Loadstar that between 1,000 and 1,300 full containers had burnt or been destroyed in the incident.

He estimated that the loss from the fire amounts to $100m.

After the Beirut blast in August 2020, Bangladesh authorities and Chittagong Port Authority had been urging port users to be cautious when handling dangerous goods.  The port authority destroyed a large number of DG containers which had been neglected at the port.

Last night’s blast was so powerful that the sound could be heard 10 kilometres from the depot. Most of the homes within several kilometres of the area lost doors and windows.

Some 25 fire-fighting units are working to bring the fire under control. An additional team has been called from Dhaka to help them, said Brigadier General Md Main Uddin, director general, department of fire service and civil defense.

Chittagong divisional commissioner Md Ashraf Uddin told the media that Army personnel have been called to help extinguish the blaze, and check the extent of the damage to the area which may have been caused by chemicals.