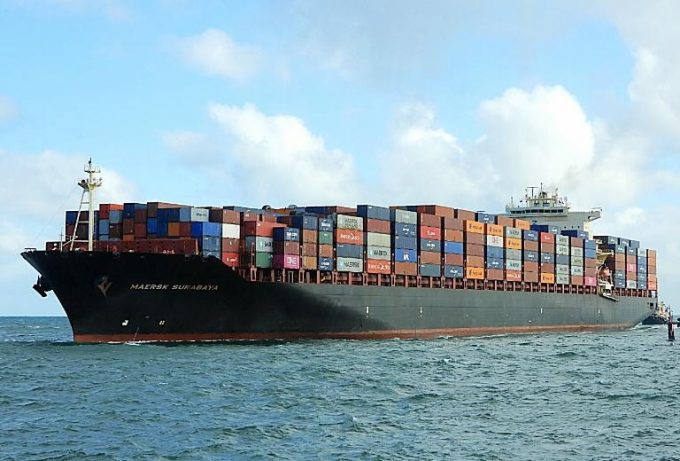 The master of the 8,845 teu Maersk Surabaya has been arrested by the Australian Federal Police (AFP) following an investigation into a damaged subsea cable off the coast this month.

According to the AFP, a 59-year-old Ukrainian has been detained in Melbourne and charged with damaging a section of the cable, around 10km off the coast of Perth.

The police said it had received allegations on 3 August that a ship had damaged the cable – with repairs potentially at A$1.5m (US$1.07m).

It is claimed that the Maersk Surabaya was anchored close to the cable protection zone and, as the vessel dragged its anchor in heavy weather it snagged the cable which was at a depth of 20 metres.

The master was charged on 11 August after AFP investigators seized vessel logs when the ship docked in Melbourne. The master appeared at Melbourne Magistrates Court via video-link, as he is self-isolating.

He is charged with “engaging in negligent conduct as the master of a maritime vessel, which resulted in damage to the Australian Singapore cable, contrary to section 37 of schedule 3A of the Telecommunications Act 1997”.

If convicted he could receive a maximum sentence of three years in prison and a A$40,000 fine. He was granted conditional bail and is currently in Covid hotel quarantine.

AFP Det Supt Graeme Marshall said: “The protection zone is clearly marked on maritime charts and all vessel masters should ensure vessels operate in a manner which does not interfere with critical communications infrastructure.”

Maersk said: “We have been notified by local authorities that the captain of the Maersk Surabaya was interviewed by the Australian Federal Police in Melbourne in connection with an incident in which the vessel may have unintentionally caused damage to a subsea communication cable. We are working with the vessel owner and fully co-operating with the relevant Australian authorities in the investigation.”

It said the ship had been at Fremantle anchorage taking shelter from bad weather from 31 July to 2 August, after which had continued its voyage.

It added: “We were subsequently notified by [the] Fremantle harbourmaster on 4 August that the vessel may have potentially caused damage to a subsea communication cable.

“Maersk Surabaya is a chartered vessel and managed by Zodiac Maritime. It has a nominal capacity of 8,400 teu. It sails under the flag of Liberia on Maersk’s Cobra service (between Australia and South Asia hubs).”