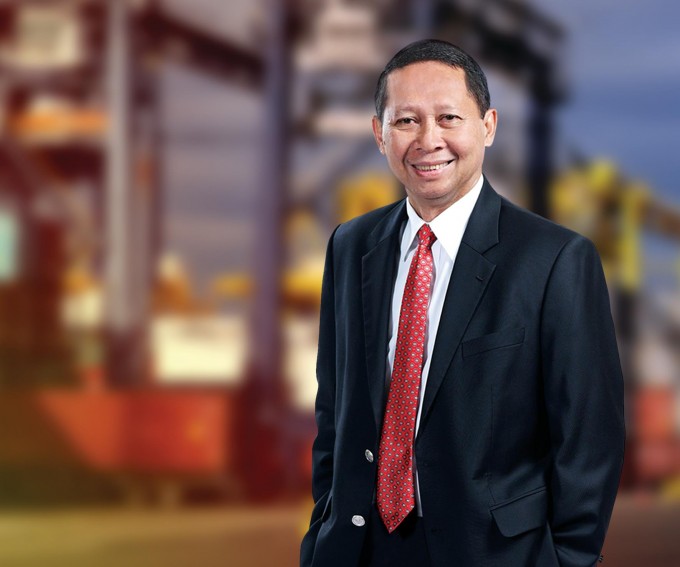 The chief executive of Indonesia’s largest port operator has been fired after corruption allegations, despite a lack of incriminating evidence against him.

Richard Joost (RJ) Lino (pictured above), former president-director of state-owned enterprise Pelindo II, now known as Indonesia Port Corporation (IPC), was dismissed by shareholders in December after being named in a corruption case surrounding the procurement of three quay cranes.

“I believe being fired by shareholders is more respectable than resigning, because I don’t believe I did anything wrong,” Mr Lino told Tempo, a local English-language magazine.

Mr Lino, who was appointed as IPC’s president-director in 2009, is accused of breaking the law by directly awarding a contract for the three quay cranes to Chinese manufacturer Wuxi Huadong Heavy Machinery (HDHM) in 2010.

Indonesia’s Corruption Eradication Commission, or KPK, named Mr Lino as a suspect in the case on 18 December, having previously questioned him in April 2014.

It accused Mr Lino of causing state-losses by not conducting a proper tender process for the cranes, and investigated whether he personally profited from the deal.

The KPK questioned him on 5 February for seven hours, but did not detain him. The interview had been delayed after he suffered a light heart attack the week before.

An industry colleague and close friend of Mr Lino’s told The Loadstar that the accusations were politically motivated, and groundless.

“His enemies were determined to put him away and the KPK interrogated him for seven hours, but they couldn’t find any evidence of corruption. It’s laughable when you know the facts,” he said.

Despite the allegations that Mr Lino directly appointed HDHM, the tender process for the three cranes, destined for ports in Palembang, Pontianak and Lampung, began in 2007, before he joined IPC.

The process failed repeatedly for three years with no contracts awarded. Then, in 2010, Mr Lino says he invited three companies to bid, including HDHM, Shanghai Zhenhua Heavy Industries (ZPMC) and Doosan.

A source close to IPC explained what happened next: “HDHM actually won that process, but one of the other companies had offered twin-lift spreaders rather than single-lift as part of a package.”

He continued: “So Mr Lino decided to say ‘well you [HDHM] are the lowest tenderer, so if you can change the spec so we have twin-lift as well, clearly you’ve got to have the contract and then we’ll have an even better spec than we started with’.

The source added that, contrary to KPK claims, not only is a direct appointment not illegal, but Pelindo III (another state-owned port operator) paid more for a single-lift crane just one month later, thus negating the claim of any state-losses.

Crucially, no evidence has been found to indicate that Mr Lino benefited financially from the deal. According to Tempo, in early 2015 the KPK received an analysis of Mr Lino’s bank accounts which concluded no money had been received from HDHM.

Sources close to Mr Lino say he was appointed with a mandate to improve port efficiency in Jakarta and bring down high logistics costs, a major barrier to Indonesia’s economic growth. Mr Lino’s long-term goal was to massively upgrade port infrastructure across the east islands, where the price of goods can be at least double those in Jakarta because of additional shipping costs.

Furthermore, they point out, he has been remarkably successful – turning IPC into a highly profitable organisation while significantly improving port efficiency in Jakarta and its outlying islands.

In Pontianak, where one of the three famed quay cranes was installed, throughput has doubled and handling costs have been halved.

Why then, would the KPK continue with the corruption allegations? Mr Lino’s supporters say he made powerful enemies early in his tenure at IPC. He was unafraid of rooting out existing corruption in his pursuit of improved port efficiency, they argue.

“Mr Lino consistently dismantled ‘the mafia’ where ever he found it. There were loads of stevedoring companies, most of which were letterheads. So he got rid of them, every week making more and more enemies while cleaning up the place. I think he underestimated how high up and how powerful these guys are,” said a close friend.

The most significant clashes have been with the port’s trade union. A string of disagreements was exacerbated by Mr Lino’s August 2014 decision to sign-off on the early renewal of the Jakarta International Container Terminal (JICT) concession with Hutchison Port Holdings.

The new contract meant that IPC became the majority shareholder in JICT, with 51%, making the terminal operator a subsidiary rather than an independent entity. To this effect, IPC made public plans to bring salaries at JICT, which were in some cases 50-60% higher, in line with the rest of the organisation.

This, according to one source, enraged the union, whose members “started doing things like sabotaging cranes at JICT”. The source added that Mr Lino had “dismissed the perpetrators and had them arrested, so the union became even more enraged and has been out to get him.”

According to Tempo, the union began lobbying the KPK as early as July 2013 to investigate Mr Lino over the 2010 HDHM crane purchases, saying that he personally profited and caused state-losses.

Meanwhile, Mr Lino’s supporters also say he is the victim of a political plot to oust his boss, State-Owned Enterprises Minister Rini Soemarno. They claim the KPK has been influenced by various political factions into naming Mr Lino as a corruption suspect in the hope of embarrassing and eventually removing the minister.

A source said: “The main party, PDIP, has been very unhappy with the minister – primarily because she’s been doing a good job.

“She’s been appointing directors to state owned companies who are competent and have track records of running businesses in the private sector; she hasn’t been appointing political lackeys. It’s really annoyed them.”