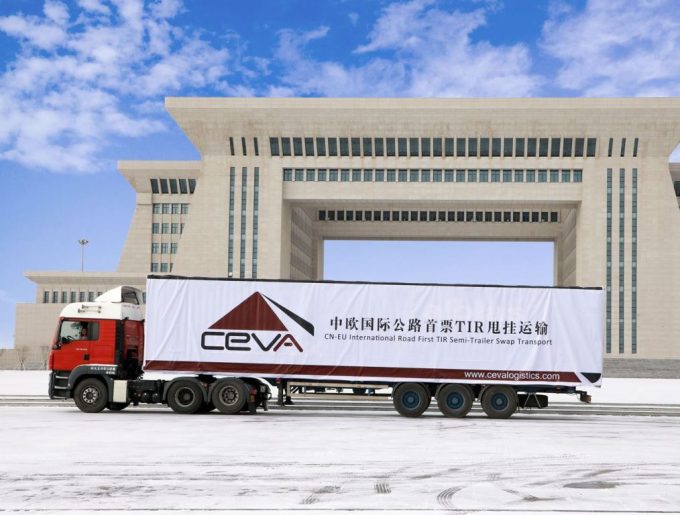 Ceva’s opening of a road freight service between China and Europe may have gained little attention – but it may well augur a transformation in the market for inter-continental freight transport.

In November 2018 Ceva started to offer its clients a road freight service between the dry port at Khorgos, on the border of China and Kazakstan, and Poland. The route taken was through Kazakhstan, Russia, Belarus and onto Poland.

The service started as a full truck load, but Ceva planned to introduce a ‘less-than-truck load’ service in August. Of course, the rail service between Khorgos and the intermodal facility at Malaszewicze in Poland has been operating for about nine years. It now is a serious option for shippers wishing to move goods more quickly in and out of China. With up to 25 trainloads arriving a week, the service is even used to move high-value passenger cars for sale in both China and Europe.

The rail service is attractive but not perfect.

It tends to suffer from the problems common to rail cargo, such as lack of flexibility, visibility and congestion at intermodal facilities. Clearly Ceva is aware of this. Kelvin Tang, Ceva’s director of road and rail, North Asia, comments: “Our trucking service can be operated with a high frequency, we can also deliver high security with an escort on selected routes, 24/7 monitoring via GPS and full visibility on temperature, speed, stops”.

Rail is an excellent option for larger, bulkier cargoes, but trucks remain the first choice of most logistics managers. Therefore, the option to just drive across Central Asia into China with just a pallet or two is a transformative one on the route.

The comparative prices of the services is also a key issue.

Obviously, this varies, but forwarders on the China-Europe Rail Express will generally quote some $3,000 for a full container load. Ceva implies that its service is cheaper. Almost as importantly, Ceva says its service is faster, with a “lead time door-to-door of between 10 to 15 days”. Generally, forwarders offering the rail service claim a timing of between 15 and 18 days.

Key to the success of the China-Europe service is the systematic improvement of the rail infrastructure, as no comparable initiative has been made for roads, yet Mr Tang says that the company has investigated the route thoroughly and found no problems.

“We did a very extensive road audit before we started the service… The route through Russia follows main highways, parts of the route across Kazakhstan and they are just normal roads. We are also very conscious of the road conditions, but again these do not cause any trouble and we have flexible alternatives should we need them.”

The World Bank and others have worked with the Kazakh government and nations in Central Asia to improve the highway network, but in contrast, numerous logistics providers report that the Russian road system can often be poor. Yet according to Mr Tang, for the routes west this is not the case, and if so, this is important. Certainly, the Russian transport ministry has announced a plan to build what it calls the “Meridian Highway” on this route, but it will apparently take more than 10 years to build.

There are other options for China-Europe services.

For example, the trans-Caspian route which accesses the Black Sea through Georgia is increasingly developed, and Mr Tang argues that Ceva has considered transiting through Manzhouli near the border of Mongolia, presumably as this gives better access to north eastern China. The pattern that appears to be emerging is a number of routes, roughly parallel, but all beginning to offer the ability to move large quantities of freight quickly and cheaply.

The implications of these types of services for global logistics are enormous.

For example, even major shippers now have the option to centralise inventory within the whole of ‘Eurasia’. Up until now, inventory has had to be located in a number of geographies in order to ensure product can be delivered within a reasonable time-frame. Hub locations such as Singapore or Dubai have benefitted from their location’s proximity to major markets in Asia.

If companies can move their product in and out of China by truck in just a week-and-a-half, the case for such inventory locations is less convincing. The cost benefits of such a reduction in inventory costs are likely to be appreciable, justifying reasonable expenditure on China-Europe transport solutions.

Of course, these services also ought to have implications for container shipping.

Although shipping between northern Europe and the ports of eastern China probably remains a cheaper option when measured in terms of price-per container, but that could change when inventory-holding and stock-availability costs are factored in.

Air freight is even more vulnerable. Although certain ‘time-definite’ air express services would find the road freight services too slow, for many less critical air freight channels, for example serving the pharmaceutical sector, the threat from road freight on the China-Europe route will be significant.

Questions about the long-term viability of all China-Europe services do remain.

One crucial aspect, for example, is that the rail service may be dependent on discreet subsidies from China aimed at fulfilling political objectives that China has for its ‘belt and road’ initiative. If road services threaten rail’s position in the market, the Chinese government could choose to be an impediment to that development.

Yet the fact remains that 10 years ago the notion that overland routes would be a competitive threat to sea freight looked far-fetched. Today, with the addition of a road freight option and at the price and service levels available, it has to be considered that the China-Europe land route will become one of the world’s major trade-lanes.

Author Thomas Cullen is chief analyst for Transport Intelligence. This article has already appeared on The Loadstar Premium.